Willingness to pay increases marginally, with younger people most likely to do so 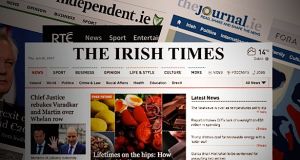 Irish people under the age of 35 are more likely to pay for online news , according to the latest Oxford Reuters Digital News Report published today.

The report notes that, despite growing up with free online entertainment, younger people have developed the habit of paying for some media. In Ireland, the 18-24 and 25-34 age groups are most likely to pay for online news, at 12 per cent and 13 per cent respectively.

Irish people have a strong interest in news and have higher levels of trust in the news media than the international average, according to the report.

The 2017 report, from Dublin City University’s Institute for Future Media and Journalism (FuJo) in association with the Broadcasting Authority of Ireland, accompanies a larger global report surveying 70,000 people across 36 markets on five continents by the Reuters Institute for the Study of Journalism at Oxford University. It confirms that traditional media – newspapers, television and radio - continue to be challenged by the growth of new technology platforms and by a more digitally literate society, potentially threatening the future of media pluralism in democratic societies.

The report also confirms that legacy media are more popular with older groups, but that there is a huge difference in uptake of TV, radio and newspapers between older and younger people, with the latter relying far more on social media. As a source of news, social media is also more popular among women than with men.

The Irish digital media market is currently in a phase of consolidation with few major developments over the past 12 months. There is also little change regarding the devices people use to access news. However, the slow decline of TV and newspaper consumption continues, particularly among people between aged 35 and 45.

The major consumption shift over the past year has been in the use of private messenger apps, such as WhatsApp and Facebook Messenger, which are used more in Ireland than in many other countries. Meanwhile, other platforms, such as Facebook and Twitter, have lost some traction for news consumption since 2015.

Some 72 per cent of Irish news consumers trust most of the news they receive most of the time and 70 per cent say the news industry does a good job helping them distinguish fact from fiction. More Irish news consumers than the international average believe Irish news is free of undue commercial and political influence, while 43 per cent also agree that social media does a good job distinguishing fact from fiction, compared to an international average of 37 per cent.

However, interest in many categories of news has declined, with some 44 percent of consumers indicating they were not interested in celebrity and entertainment news, with 42 percent not interested in sports news.

The report’s authors suggest such figures may show that “dumbing down” news may not be a wise strategy for Irish media. “News providers might also reconsider their menu offerings in the areas of business and sport where female interest levels are much lower than male,” they add.

“Is it wise to allocate so much of the available news space to these areas given the lack of appetite among the female audience? In addition, it is sometimes suggested that entertainment and arts news is aimed more at a female than a male audience. Given that these areas interest just 26 percent of women, do such assumptions about content need to be re-examined?”

Ireland is notably less partisan and more centrist than most other countries, according to the survey, and the political leaning of the consumers of various Irish news brands reflects this. Consumers of The Irish Times, TheJournal.ie and Today FM were the most left-wing, while consumers of RTE Radio, Sky News and the Irish Independent online were the most right-wing. The report cautions that it would be unwise to read too much into these figures.

The research was conducted online in January/February 2017 with a sample of 2,000 people, all of whom had accessed news in the previous month.