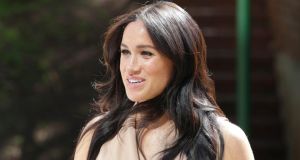 The Mail on Sunday has run multiple embarrassing stories involving Meghan Markle’s father, Thomas Markle, including staged paparazzi photographs of him visiting an internet cafe to read about his daughter’s engagement to the prince. Photograph: Kim Ludbrook/EPA

Meghan Markle, duchess of Sussex has taken the unusual decision to sue the publisher of the Mail on Sunday after the newspaper published a handwritten letter she had sent to her estranged father.

Ms Markle has started proceedings in the high court over the misuse of private information, infringement of copyright and breach of GDPR regulations.

Ms Markle and her husband, prince Harry, who are on a tour in South Africa, have employed the libel lawyers Schillings using private funds to bring the case.

The Mail on Sunday has run multiple embarrassing stories involving the duchess’s father, Thomas Markle, including staged paparazzi photographs of him visiting an internet cafe to read about his daughter’s engagement to the prince.

In a lengthy statement released alongside the announcement of legal action, Prince Harry said his wife had “become one of the latest victims of a British tabloid press that wages campaigns against individuals with no thought to the consequences”.

“I’ve seen what happens when someone I love is commoditised to the point that they are no longer treated or seen as a real person. I lost my mother and now I watch my wife falling victim to the same powerful forces,” he added.

Princess Diana died in a car crash in Paris in 1997 after being followed through the streets by photographers. She became one of the most photographed women on Earth after she married into the British royal family.

The Guardian reported this year that the Mail on Sunday was being threatened with legal action because the authors of letters retain ownership of the copyright even after the physical correspondence is in the possession of another individual.

A legal spokesperson for Schillings said: “We have initiated legal proceedings against the Mail on Sunday, and its parent company Associated Newspapers, over the intrusive and unlawful publication of a private letter written by the Duchess of Sussex, which is part of a campaign by this media group to publish false and deliberately derogatory stories about her, as well as her husband.

“Given the refusal of Associated Newspapers to resolve this issue satisfactorily, we have issued proceedings to redress this breach of privacy, infringement of copyright and the aforementioned media agenda.” – Guardian News and Media 2019