Mary Tyler Moore brought a new depiction of the American woman to both “The Mary Tyler Moore Show” and “The Dick Van Dyke Show.” Virginia Heffernan, a contributing writer for The New York Times, discusses Ms. Moore's roles and their influence. 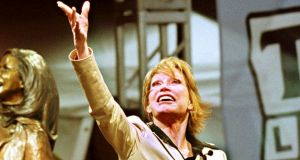 Mary Tyler Moore tosses her hat skyward, recreating the end of the opening credits of the 1970s sitcom ‘The Mary Tyler Moore Show’, in Minnesota, the US. Photograph: Eric Miller/Reuters

The charming, funny Mary Tyler Moore, who has died in Connecticut at the age of 80, occupies a singular position in the history of US entertainment.

She first gained fame during the early 1960s as the mildly modern housewife - prone to the odd shimmy - in the hugely popular Dick Van Dyke Show.

But it was her role as Mary Richards in The Mary Tyler Moore Show that secured her televisual immortality.

Running from 1970 until 1977, the series, set in a Minneapolis TV newsroom, was among the first situation comedies to focus on an unmarried professional woman.

The show addressed issues such as adoption, prescription drug abuse, racial prejudice and gender inequality, without ever forgetting to deliver the killer punchlines.

Moore’s performance was vital to the series’ success.

To this point, TV had rarely allowed glamorous women to be funny without the injection of some foolishness. The peerless Lucille Ball was at her best when making a mess of things.

Mary Richards, however, was competent, responsible and ordered, but, as played by Moore, she delivered zingers with a heavenly timing that nobody can teach.

From the moon landing to the arrival of president Jimmy Carter, the series caught the national mood without ever seeming to strain for importance.

A great lady I loved and owe so much to has left us. I will miss her. I will never be able to repay her for the blessings that she gave me.

Thanks for the first real image of a woman being independent, funny & vulnerable. Thank you for changing the face of TV, #MaryTylerMoore! pic.twitter.com/3rZbPczSnF

R.I.P #maryTylerMoore "who can take a nothing day and make it all seem worthwhile well it's you girl and u should know it"

Mary Tyler Moore changed the world for all women. I send my love to her family.

Rehearsing on the #MaryTylerMoore stage today. A minute's silence as we remembered 1 of the true greats of TV comedy pic.twitter.com/UFHIkvWg3i

One of the most memorable moments saw Mary, with a scornful laugh, putting the phone down on Betty Ford, because she refused to believe the voice was really that of the then first lady.

It was indeed Mrs Ford on the phone, such was the show’s reputation during its high period.

Mary Tyler Moore was born in the attractive New York quarter of Brooklyn Heights to a middle-class family.

The Moore clan then moved to Los Angeles when Mary was eight.

At 17, she began to get work as a professional dancer.

Bit parts in TV followed, before Carl Reiner cast her in The Dick Van Dyke show.

In 1980, however, she received an Oscar nomination for playing a bereaved mother in Robert Redford’s Ordinary People.

That part had an eerie echo the very same year, when her own son accidently killed himself with a shotgun.

Married three times, she managed diabetes for most of her life and had occasional struggles with alcoholism.

As the news of her death emerged, thousands of fans surely retired to YouTube to play the famous closing moment of the Mary Tyler Moore Show title sequence.

Excited at being young and alive, her character throws her hat joyously in the air. The shot then freezes in a state of ecstatic incompletion.

No more evocative image exists of TV in the early 1970s.