Louis Theroux treats rape and consent as a freak show 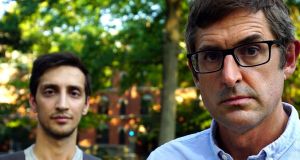 Louis Theroux really knows how to pick them

One of the necessary correctives in society’s treatment of rape and sexual assault cases is to begin by believing the victims. That shouldn’t be a controversial position, to avoid the victim-blaming reflex of rape culture, in which a revealing dress is considered to be “asking for it”, and in which false accusations are imagined to be as prevalent and grave as sexual assault itself.

In turning his attentions to the phenomenon of American university rape cases, and competing standards of evidence and culpability, Louis Theroux inspires another response – whether we should believe his intentions.

In truth, this is something that has long dogged Theroux, first as a disingenuous snoop raking through the gaudier excesses of celebrities, latterly approaching weightier subjects with studied impassivity.

With the individuals involved in The Night in Question (BBC Two, Monday, 9pm), though, Theroux really knows how to pick them.

Beginning with Saif Khan, a Yale student acquitted of rape by a criminal trial, but still suspended while undergoing a university investigation, Theroux speaks of “trying to figure out where the truth lay” in the allegations against him. We aren’t left guessing for long.

Khan, a neuroscience major with a clinically calm manner, denies all wrongdoing, implying that the charge was brought by grievance, or “buyer’s regret” as Khan’s lawyer puts it, no model of charm himself.

“Saif’s view of himself as a victim of a cruel injustice was apparent,” says Theroux carefully.

Khan, however, discusses his preference for aggressive, one-sided sex acts without embarrassment or apology. His insistence that he would rather concentrate on his partner’s pleasure – that he is ordinarily “focused on helping them achieve what they want” – might sound more reassuring if he didn’t use the words of a corporate consultant.

Gob-smackingly, mid-way through the programme, one of Khan’s associates, a colleague from an organisation that represents unfairly accused males, flips on him and informs Theroux about Khan’s practised manipulations and lurid, non-consensual sex acts.

With sober interviews of other survivors campaigning for justice, and footage of university orientation sessions on unequivocal understandings of consent, the programme might legislate a culture war in Trump’s US, which, unsurprisingly, is currently shoring up the rights of accused. But in Khan, it finds a freak show.

“He made me watch all your documentaries, actually,” Khan’s former associate tells Theroux, “and do write-ups on them, on your mannerisms and how you interview people.” Theroux is aghast, and for good reason: that’s my editor’s job.

But one wonders how surprised he really is. He later confronts Khan on camera with suggestions he is “a cold-blooded master strategist, deeply manipulative and totally lacking in compassion”. Those are some of the traits of a psychopath, a word Theroux does not use, yet he has a gimlet eye for finding them.

Instead, as Khan’s case eventually unravels, Theroux allows only that Khan’s attitude to sex is “detached and transactional to the point that felt a little chilly”. Why downplay it?

Perhaps because the programme recognises, through interviews with more sympathetic figures, that it really is the grey areas rather than the extreme cases where positive work can be done – in understanding where consensual sex suddenly crosses a line, or that violation doesn’t always require grisly evidence.

In the end, though, Khan’s more astonishing, sensational example dominates the programme. Who consented to that?