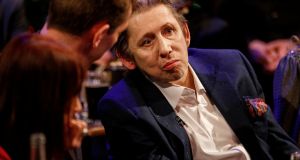 The campaign to install Shane MacGowan as unofficial national treasure proceeds apace. In 2018, Bono and Johnny Depp parachuted into the National Concert Hall for a glittering homage to the Pogues singer on his 60th birthday. Now he receives RTÉ’s ultimate honour: a dedicated Late Late Show tribute.

Your price of entry to the two plus hours jamboree is accepting Fairytale of New York is the greatest Christmas song ever and that MacGowan, a child of migrants who passed much of his upbringing in Tipperary, embodies the point where Irishness and the diaspora meet. If you’re okay with all the above then this big-hearted pre-Christmas knees-up is sure to impart a lingering glow. And that’s despite a shaky start as actor and musician Pat Shortt arrives in flat-cap and hi-vis vest to menace audience members in a broad Tipp accent (hoo, hoo - those “country” folk etc).

What it isn’t, however, is a shameless whitewash. Presenter Ryan Tubridy, to his credit, addresses the tinsel-festooned elephant in the room, asking MacGowan about the controversy around the use of a homophobic slur in Fairytale of New York.

“What do you make of the last few years . . .the political correctness element of it?” wonders Tubridy.

Shane MacGowan's friends from around the world send their well wishes. #LateLate pic.twitter.com/gUxmn3TUHR

“I’ve been told it’s insulting to gays,” says the singer, propped up in a chair but lively on-and-off through the evening. “I don’t understand . . . that.”

“It’s about whether or not the word fa***t should be in a song,” said Tubridy. “Oh f**k that,” said MacGowan. The applause verged on riotous.

The tribute is framed as a sort of after-hours jolly at Tubridy Tavern. Pint glasses and candles are set on tables; in the backdrop looms an image of the Brooklyn Bridge (in reference to Fairytale, obviously).

The boozy setting has led to criticism of RTÉ and specifically claims it has glamorised drinking to excess. Social media is also upset about the big finale performance of Fairytale, in which MacGowan duets with Philomena Begley and Shortt toots the world’s shiniest saxophone. Begley does occasionally appear to stumble, it is true. But Fairytale is a pledge of undying devotion in the style of an inebriated sing-along. One or two flubs surely shouldn’t burn Twitter down to the ground.

A starry cast of well-wishers has been assembled. Aidan Gillen recalls MacGowan’s music speaking to him when he was a young actor living in London. Glen Hansard remembers when growing up in Ballymun, the Pogues and Bob Marley were on everyone’s mix-tape (and duets on A Rainy Night In Soho with Lisa O’Neill). There are video eulogies from Bobby Gillespie of Primal Scream, actor Tom Vaughan-Lawlor and Paul Simon (apparently taping his piece on a golf course in the midst of a hurricane - so bravo for that).

A wider assessment of MacGowan’s music is obviously outside the scope of the broadcast. Some might argue that the Pogues only spoke to one idea of Irishness and that the second generation band that captured the essence of the Celtic soul most accurately was the Smiths, with their dark wit, sexual hangups and poetic miserabilism.

But no matter - in terms of doing what it says on the tin, the Late Late MacGowan tribute ranks as top-rate seasonal shindig. The guests are sincere in their admiration. The performances are as raw and ragged as you would anticipate (does anyone want a slick Shane MacGowan homage?). And MacGowan comes across deeply humbled. Essentially it’s the Toy Show for grown-ups: with closing-hour banter instead of wind-up bunnies and, in place of Tubs’ satanic sweaters, MacGowan’s crooked grin bewitching the camera.