Virginia Giuffre’s heartbreaking, vivid account of being told to have sex with Prince Andrew

Panorama review: ‘It made me sick,’ says Giuffre. ‘I just didn’t expect it from royalty’

Virginia Giuffre tells BBC Panorama that she was forced by Jeffrey Epstein to have sex with Britain's Prince Andrew when she was just 17. Video: BBC Panorama/Reuters 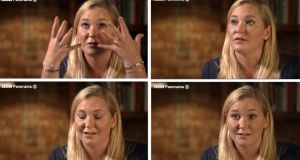 A combo of images taken from video issued by the BBC of Virginia Roberts Giuffre. Photograph: BBC Panorama via AP

Of the many scandalising missteps of Prince Andrew’s extraordinary interview with Newsnight two weeks ago – an interview intended to distance himself from the convicted child sex offender Jeffrey Epstein, and whose effect was to let the pall of association hang heavier around him – the most glaring was his lack of consideration for Epstein’s victims.

The Duke of York, a heavy frowner, was anxious to point out that they had not been “close friends”, despite numerous meetings, celebrations and mutual visits, pointing out his decision to break off their friendship in 2010, in person, over the course of a five day sojourn in Epstein’s infamous New York townhouse. His interviewer, Emily Maitlis, was understandably confused.

Prince Andrew tried to clarify with a mea culpa that seemed as sincere as a lofty CEO asked to share his biggest weakness: “I admit fully that my judgment was probably coloured by my tendency to be too honourable,” he said, as the honour slowly drained from his face, “but that’s just the way it is.”

Well, not anymore. Andrew has since been forced to step back from public duties while the FBI have stepped up their plans to interview him in its investigation into Epstein’s sex trafficking.

In the meantime, more of Epstein’s victims have gone public, with an urgency that has only intensified since Epstein’s mysterious suicide in prison. Few, though, have had the temerity of Virginia Giuffre, the focus of Panorama’s broadcast The Prince and the Epstein Scandal (BBC One, Mon, 9pm).

"I’m calling BS on this, because that’s what it is.”

Prince Andrew says he has no recollection of meeting Virginia Giuffre, nor of any photo being taken with her and he emphatically denies he had any form of sexual contact or relationship with her. pic.twitter.com/aqQ76kpPHI

Where Prince Andrew flatly denied ever having met her, Giuffre, who says she was groomed and abused by Epstein and his girlfriend Ghislaine Maxwell, details how she was coerced into having sex with Prince Andrew on three occasions, including one instance in Maxwell’s home, where a now famous photograph was taken of the Prince in a clinch with the 17-year-old girl.

Giuffre, now married, a mother and founder of Victims Refuse Silence support group, describes how her youth was marred from the age of seven by abuse and exploitation. Discovered by Maxwell (whom another survivor describes as the “madame” of Epstein’s sex operation) in Donald Trump’s Mar-a-Lago resort, she was offered a job as a masseuse and quickly manipulated into sex.

In court documents, Prince Andrew was described as a regular visitor to Epstein’s Palm Beach home. Asked if the Duke of York had weekly massages there, Epstein’s housekeeper replies, “I would say daily massages”.

Giuffre’s recollections of Prince Andrew are as vivid (in her accounts of his dancing and profuse sweating, and her clinical description of “the whole, entire procedure”), as his defence sounded ridiculous (“I didn’t sweat at the time.”)

But her sense of betrayal, when told she would “have to do for Andrew what I do for Jeffrey” is heartbreaking: “And that just made me sick,” she tells reporter Darragh MacIntyre. “I just didn’t expect it from royalty.”

Authority in various forms, whether represented by wealth, politics or the law, seemed equally untrustworthy: “These powerful people were my chains,” Giuffre puts it.

Panorama dutifully reports that there have been inconsistencies in Giuffre’s story, involving dates and locations, as well as those of another victim interviewed here, Sarah Ransome. But the confirmed facts are beyond damning, and Prince Andrew’s continued association with Epstein, a convicted child sex offender, allows the BBC to state bluntly some otherwise inconceivable phrases: “The Prince and the paedophile took a walk in Central Park.”

Prince Andrew has been subpoenaed by five accusers to testify as a witness to what he saw in Epstein’s properties. The Prince, who belatedly now expresses regret about his friendship with Epstein, and conveys through statement his sympathies for his victims, has told Panorama that he is willing to help with any enquiries “if required”.

Should he return to the US, he may be compelled. Were he to speak with the sincerity and conviction of Virginia Giuffre, the victims of Jeffrey Epstein, and others, may finally come closer to the truth.