Review: The Chief Medical Officer gets star billing above Springsteen and McConaughey 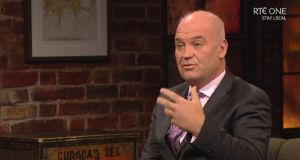 Tony Holohan: his relationship with Varadkar is ‘very good’

So utterly has coronavirus infected our lives it makes perfect sense that Tony Holohon should receive star billing ahead of Bruce Springsteen on the Late Late Show (RTÉ One, 9.35pm).

The Chief Medical Officer and chair of Nphet adopts a cautious and, so far as prudent, optimistic tone as Ryan Tubridy’s first guest in a Late Late that packs in two solid hours of chat, tragedy and chuckles.

Holohan’s resolve is impressive. For a moment, it’s like being back in March when we were all carried aloft by a genuine solidarity with one another. It’s a reminder, moreover, that the Late Late Show still has a central place in the national conversation. Mutterings regarding its slump into irrelevance are perhaps exaggerated.

“It’s not easy to tell them to stop having fun,” says Holohan of young people, demonised of late for behaving like young people. “They’ve had to shoulder a huge burden.”

He cautions, too, against the temptation to point the finger. The goal of the six-week Level 5 lockdown we’re headed into isn’t to assign culpability: it’s to reduce the spread of the virus.

“If young people pick up this infection it’s not their fault. They’re not to blame,” says Holohan, who recently returned to his duties having stepped back due to family reasons.

It’s a decent performance from Tubridy. The rote criticism of the host is that he’s good at fluff, not so strong at pinning guests to their collars. Yet he’s on point here as he asks about tensions between Nphet and Tánaiste Leo Varadkar.

“It’s very good,” says Holohan of his relationship with Varadkar though the ghost of something that is almost (if not quite) a smile drifts across his lips.

However, while striving to be as upbeat as possible, his ultimate message is not especially cheerful. Christmas isn’t cancelled. But it won’t really be Christmas either. And after that, the struggle will go on until a vaccine is found.

“There will be things about this Christmas that will have to be different,” says Holohan. His tone is kind. It’s hard not to feel a chill.

There is quite a line-up on the Late Late this week. Movie star Matthew McConaughey joins by Zoom, as does former Fox News host Megyn Kelly (“If Trump wins on November 3rd, I won’t be the least bit surprised.”). And there is a moving interview with the family of Seán Cox who suffered brain injury when he was assaulted at a soccer match in Liverpool in 2018.

“I would have walked over coals, for Seán,” says his wife Martina, in the studio while Sean and their children join by video link from Dunboyne. “You just get that instinct inside – you to battle for everything.”

She also criticises the health system, suggesting the family had been left to its own devices after her husband’s discharge from the National Rehabilitation Hospital in Dun Laoghaoire.

“I was told, I’ve got a marathon ahead of me. We had to carve that pathway ourselves.”

This is counterpointed with a sprinkling of rock ’n’ roll courtesy of Bruce Springsteen. Beaming in from New Jersey he tells Tubridy he will move to Ireland should the unthinkable come to pass all over again : “Trump will lose. If not, make room for me in Ireland.”

He also reveals his anti-depression medication is keeping his demons at bay and muses on how, as you get older, death becomes more central in your life (a mirror image of your childhood and the funerals of grandparents).

Weirdly, Springsteen and Holohan are on the same page regarding coronavirus. Asked if he anticipates touring in the near-ish future, Springsteen echoes the boss of Nphet with the message that this nightmare is a long way from over.

“I don’t believe the virus is going to go away,” says the voice of blue collar America. “We’re just going to find better ways to handle it.” If Holohan steps away again, perhaps they should put Springsteen in charge. The outlook would still be grim. But at the least the tunes would be good.