Judging by Ryan Tubridy’s show, we have Covid-19 on the run

Radio review: The chipper presenter barely referred to the pandemic this week 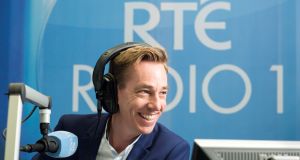 Ryan Tubridy despairs of the ‘contagion of misinformation’ in the online world. Photograph: RTÉ

It may only be a trough between waves, but judging by Ryan Tubridy’s choice of topics, Covid-19 is definitively on the wane. On The Ryan Tubridy Show (RTÉ Radio 1, weekdays), the presenter rarely refers to the pandemic. That’s the good news. The bad news is that the subjects he instead covers ­include the blight of racism, the corrosive effects of social media and the plight of exhausted carers.

It’s too early for lockdown nostalgia in the style of the curious British affection for the Blitz, but the presenter’s downbeat bill of fare appears designed to make his audience misty-eyed for the days of cocooning and the 2km travel ban. Yet, throughout it all, Tubridy sounds as chipper as ever.

On Monday, he talks to Donie O’Sullivan, who investigates online disinformation campaigns for the US news channel CNN, about the conspiracy theories thriving on digital platforms such as Facebook and Twitter. O’Sullivan outlines how freakishly outlandish theories such as Pizzagate and QAnon have gained mainstream traction largely via social-media algorithms.

The more Tubridy reflects on how fake news on social media has eroded trust in civic institutions, the more fetid his metaphors become

Tubridy despairs of the “contagion of misinformation” in the online world, comparing it to the witchhunting paranoia of Arthur Miller’s play The Crucible. “It’s a breeding ground,” he says.

The more Tubridy reflects on how fake news on social media has eroded trust in civic institutions, the more fetid his metaphors become. “It’s a dangerous cauldron and we swim in it,” he says. “Democracy swims in it, and democracy dies in it.”

By now even his guest sounds rattled. “This is very bleak for nine o’clock in the morning,” O’Sullivan remarks. But while it’s a sobering item, Tubridy sounds in his element as he indulges his wonkish side.

The following days’ topics aren’t any more uplifting, at least on the surface. On Tuesday the host talks to Conor Buckley, son of the late institutional-abuse campaigner Christine Buckley, about his mixed-race heritage and his experience of prejudice here. With grim inevitability, Buckley recalls insults directed at him, as well as recounting his mother’s cruel upbringing as a biracial child in a Dublin industrial home.

He also talks about the uncomfortable ambiguities of being a person of colour in Ireland: termed “half-caste” when growing up, Buckley and his brother have differed on whether they see themselves as black or white.

These are timely, thought-provoking issues, yet somehow there’s an almost buoyant feel to the item. This is partly to do with Buckley’s quiet self-assurance, though Tubridy’s instinct for the upbeat also plays a part: he perks his guest up by asking him about recently becoming a father. The end result is that while Tubridy’s abhorrence of racism is obvious, he doesn’t dwell on the glaring negatives too long.

Even if he can’t quite master gravitas, Tubridy’s sincerity of intent and empathy with his guests appear genuine. Either way, as we inch back to normality, Tubridy doesn’t paint a rosy portrait of the world that awaits us

It’s hard to be cheerful during Wednesday’s conversation with Nina, who unflinchingly describes her life as a single mother caring for her four-year-old son, Jack, who has severe disabilities. Nina’s story is desperately sad: Jack, who is nonverbal, has been fed through a tube since he was a baby, necessitating his mother to swap her career for an unremitting daily care routine. “There’s no time to think about yourself, because all my time goes into looking after Jack,” she says. Things recently reached crisis point, with Nina hospitalised after a physical collapse.

Tubridy’s tone mirrors the sombre subject. He inquires after his guest’s wellbeing in oblique fashion. “When was the last time you looked out a window?” he asks, prompting Nina to well up briefly as she reflects on her situation. “The feeling is, this is my life,” she says. “I made this decision. In some ways you get used to it.”

It’s heartbreaking, all the more so for Nina’s uncomplaining nature. Even then, Tubridy tries to look on the bright side. “You love your boy, though,” he says, somewhat unnecessarily, as even he acknowledges. “I don’t know why I said that.”

For all that Tubridy’s interviews tackle urgent issues, none of them could be called hard-hitting. But even if he can’t quite master gravitas, Tubridy’s sincerity of intent and empathy with his guests appear genuine. Either way, as we inch back to normality, Tubridy doesn’t paint a rosy portrait of the world that awaits us.

Meanwhile, it’s back to business as usual on The Hard Shoulder (Newstalk, weekdays). Its host, Ivan Yates, sounds positively elated as he dissects the political manoeuvring that follows government-formation talks between Fine Gael, Fianna Fáil and the Green Party. On Wednesday he voices his dismay at the ambivalent attitude of the Green TD Neasa Hourigan towards the agreement she helped negotiate. Equally, there’s no disguising his glee as he says her stance is “getting on my goat”. Likening the TD to a “second year student”, he urges Hourigan to “grow up”, as politics is an “adult game”.

Yates’s monologue is more than a tad patronising, but he has a purpose beyond spluttering outrage: it’s not Hourigan’s position that bothers the former Fine Gael minister so much as her lack of one. “The point is, she didn’t say she was voting yes or no. She was dithering on the fence,” he says. It’s not an accusation easily levelled at the host.

Likewise, Yates’s interview with the Fianna Fáil TD Éamon Ó Cuív has a lively lilt. Ó Cuív, the grandson of Éamon de Valera, explains his opposition to the agreement. “I don’t believe this is the government that the people voted for,” he says, presumably following his grandfather’s example by looking into his own heart to ascertain the Irish people’s wishes.

Yates lets his guest have his say before letting rip. Ó Cuív not only prefers a coalition with Sinn Féin, asserts the host, but also wants to “perpetuate Civil War differences” because of his family history. His guest sounds slightly taken aback by such bluntness, though he can hardly be surprised. After three months of chafing under the restraints of covering coronavirus (not always gracefully), Yates sounds happy to be back stirring it up in the real world, no matter how bad things are.

Radio Moment of the Week: Gone to the dogs

For anyone feeling stir crazy, the Documentary on One: The Long Run (RTÉ Radio 1, Saturday) offers a bracing tonic, tracing the fortunes of the London-Irish woman Helen Mullane as she participates in the Femundlopet, a 650km dog-sledding competition in the depths of the Norwegian winter. The programme discovers how the slightly built Mullane ended up racing alongside Scandinavian men as a “musher”, leading a pack of 12 dogs through subzero temperatures on “one of the most hellish races on Earth”, according to the programme’s narrator, Donal O’Herlihy.

Like any good race, the documentary moves from a slow opening canter to a triumphant – if not necessarily victorious – conclusion, while vividly evoking the harsh conditions endured by Mullane. It’s enough to make you want to stay cooped up a while more.