Hook to Coppinger: ‘You have no manners. Now shut up’

George Hook, decrying the erosion of civility, fails to practise what he preaches 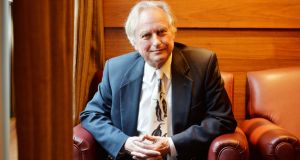 Richard Dawkins: a big fan of the son, if not the father. Photograph: Alan Betson

It’s not every day the country gets a new taoiseach, so one might expect the political junkies of talk radio to get worked up about last week’s elevation of Leo Varadkar to the top job. But, in a worrying sign for the incoming Taoiseach, the response is strangely muted.

Shane Coleman, co-host of Newstalk Breakfast (weekdays), is regularly teased by his colleague Paul Williams for being a politics nerd. So when Coleman declares his “massive disappointment” at what he sees as a dearth of talent in Varadkar’s ministerial picks, it’s not an auspicious start for the new administration.

Normally cast as the long-suffering voice of reason in his double act with Williams, Coleman decides to be the editorial attack dog for a change.

It’s like lunchtime in Nando’s, there are so many Ministers around the table

Doubting the ability of new Minister for Justice Charlie Flanagan to reform An Garda Síochána, he says he would have preferred Heather Humphreys, who “would have given the gardaí a toe up the you-know-where”.

He bemoans the “half-demotion” of Mary Mitchell O’Connor to a newly created super junior ministry. “It’s like lunchtime in Nando’s, there are so many Ministers around the table,” he complains.

The air is one of weary fatalism rather than splenetic outrage, but it’s striking nonetheless, given that Coleman isn’t normally given to predictable rent-a-rants. Even his co-host seems slightly taken aback: “You’ve got me depressed now.”

Lest one think that Williams is losing his natural tabloid touch, he jokily describes Varadkar as “Ireland’s most handsome taoiseach”, asking listeners for their opinion on the matter. “All right, you’ve made your point,” says Coleman, resuming the role of ever-patient straight man.

On the face of things, Seán O’Rourke approaches the new premier’s arrival with a due sense of occasion, broadcasting Wednesday’s edition of his show (Today with Seán O’Rourke, RTÉ Radio 1, weekdays) from famed Dáil hangout Buswells Hotel.

He starts off by asking Fine Gael’s Regina Doherty about a possible ministerial appointment (she later ends up as Minister of Social Protection), breezily inquiring if she is “glad, confident and expectant”.

“I don’t know,” comes the listless reply, promptly taking the wind out of O’Rourke’s sails.

This opening exchange somehow sets the tone for the ensuing discussion. Aside from a spirited exchange between Doherty and People Before Profit TD Bríd Smith over welfare fraud, it’s a dutiful overview of possible developments rather than an expectant heralding of a new era. Even O’Rourke’s enthusiasm seems to have waned by the end.

This sets the tone of the interview, with both men essentially at cross-purposes throughout

The presenter sounds more like himself when talking to author and scientist Richard Dawkins the day before. Dawkins is on wearing his high-profile atheist hat, which his host tries to knock off with admirable doggedness if occasionally shaky logic.

O’Rourke begins by asking his guest why his theory on the origin of the evolutionary process “excludes the possibility of a creator called God”.

“Because it doesn’t explain anything,” replies Dawkins firmly.

This sets the tone of the interview, with both men essentially at cross-purposes throughout.

It’s a compelling encounter. Dawkins, who sounds more reasonable than his fearsome reputation suggests, pitches himself as a paragon of rationality. But he occasionally overstretches his argument, as when he blames religious schooling for the Troubles. An exasperated O’Rourke dismisses this as oversimplification, pointing to other factors such as “plantation, dispossession and nationalism”.

O’Rourke strays on to thin ice too, however. At one stage he asks Dawkins to explain the miracles – or “extraordinary recoveries” – attributed to candidates for canonisation.

“I can’t believe you take this seriously,” says Dawkins incredulously, stressing that unexplained spontaneous recoveries happen in medicine, regardless of prayer.

It’s not all fireworks. O’Rourke perks up at the mention of an old textbook on Catholic teaching. “Oh, the green catechism, the Baltimore catechism,” he chirps, reeling off lines from it for his slightly bemused guest.

Dawkins, meanwhile, turns out to be an unlikely fan of Jesus’s teachings. His own prescription for living, a “secular moral philosophy” of “sitting down together and working out what would make the world a better place”, sounds as altruistic and idealistic as turning the other cheek, and about as practical and attainable too. But ultimately both host and guest sound like they’re enjoying themselves. Such small displays of mutual respect make the world a slightly better place.

The erosion of civility in public life exercises George Hook, presenter of High Noon (Newstalk, weekdays). But alas, he fails to practise what he preaches. Reflecting on the resignation of Enda Kenny, he focuses on one of his bêtes noires, People Before Profit TD Ruth Coppinger, taking issue with her Dáil address to the departing taoiseach.

Coppinger’s speech, a catalogue of what she sees as Kenny’s failings in office, is marked by monotone earnestness and a certain gracelessness, but for Hook it proves she hasn’t got “a shred of good manners”.

Cranking up his irritation, the presenter wheels out medieval monarch Henry II’s famous complaint about the martyred archbishop of Canterbury, Thomas Becket: “Who will rid me of this difficult priest?” (The more usually accepted quote says “turbulent priest”, but no matter.) The presenter echoes these sentiments in regard to Coppinger, though presumably without seeking the same outcome: Becket, after all, was murdered on the back of Henry’s outburst.

Instead, Hook merely ends his plea for politeness with some suitably respectful advice. “Just shut up, will ya?” Who says civil society is dead?

Radio moment of the week: Full marks to Mitchell

We live in tough times for pedants, what with “literally” having replaced “metaphorically” in everyday use and apostrophes being randomly strewn around sentences like so much confetti. Kudos, then, to Fiona Mitchell, RTÉ’s London correspondent, for resisting any misuse of language on Morning Ireland (RTÉ Radio 1). On Monday she reported that British minister David Davis had pledged loyalty to his embattled prime minister. “He is one hundred and t . . . 100 per cent behind Theresa May,” Mitchell says, catching herself before committing an egregious sin.

Academic freedom, boycott and the question of Palestine
9