The show returns to our TV screens and season five was its best yet. Here’s how the last episode left things 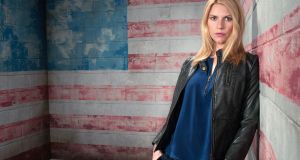 ‘Look into my eyes. Watch the show. Tell your friends.’

Homeland has the sort of survival instincts that Jack Bauer would kill for (actually that’s setting the bar quite low; Jack would kill to skip the queue in the coffee shop). What began in spectacular fashion in 2011, and relaunched the career of Claire Danes, became something of an also-ran, as several seasons veered into the ridiculous, and most people got bored with Brody (Damian Lewis). But hardcore fans who stuck with Carrie Mathison say season five was its best yet. Tonight, the show’s sixth season returns to our screens on RTE Two, ahead of the UK screening of the show. So where did we leave things?

The last season saw Carrie save the Berlin underground from a sarin gas attack by an Isis group. In the process she killed its main instigator, Bibi (René Ifrah), who killed Qasim (Alireza Bayram), the classic reluctant terrorist character who redeems himself before dying.

Perhaps the most interesting element last season, though, was the betrayal of Saul Berenson (the delightfully named Mandy Patinkin). The European division chief at the CIA, who is like everyone’s favourite uncle but with access to reaper drones, spent much of last season trying to catch his former lover Allison Carr (a terrifically ruthless Miranda Otto), who it turns out was a Russian spy all along.

Saul gets her location after cutting a deal with Russian intelligence agent Ivan Krupin (Mark Ivanir). Allison does her damndest to make the Berlin attack happen (which includes lying about the location of the attack and shooting herself in the shoulder to cover her tracks), and then decides to smuggle herself back to the motherland. Instead, she finds herself shot to pieces after her car is attacked in an eerie Polish forest road by a team headed by Saul. This is brutal and also seems a bit unnecessary – wouldn’t a crack military team have the necessary skills to stop an ordinary car on a deserted road without shooting it to bits? Hell hath no fury like a spook scorned, it seems. John le Carré would have approved.

Meanwhile, fresh from saving everyone again, Carrie gets dumped by Jonas, only to have Otto Düring hit on her, in a move that surprises no one. Her time at the foundation is over, but she looks unlikely to jump back into the field, despite Saul offering her a great gig that seems like she can wander the world renditioning whoever she wants (company car = black helicopter, one assumes). It’s hard to know where this one will go for season six, but despite turning down Saul, Carrie seems unlikely to give it all up to play foundation housewife to a man who is about 20 years her senior.

But what of cuddly Quinn, everyone’s favourite killer, and never quite properly romanced by Carrie (he refers to this as a “false glimmer”, which is also the title of this episode)? He is in a hospital bed with significant brain damage. In the series’ final moments, Carrie goes into his room, blocks the door, and pops off his monitor. It looks like she’s preparing to euthanise him (stop solving everything with killing, Homeland!), as his voice narrates a final letter in typical gruff, heartbreaking style. Oh Quinn, such a charmer. Just before that though, in a cheesy cliffhanger, a burst of sunshine lights up the room and she holds fire.

Laura (Sarah Sokolovic) and Numan (Atheer Adel) got a little spun off as season five went on – after all, it’s hard to compete with Allison’s delicious treachery. But at the end Laura tells Numan she can never speak to him again as part of the deal she’s made with the German secret service. But that deal saves Numan from being extradited to Turkey, where he would be executed. Faisal Marwan (Ercan Durmaz) gets the rawest deal though – after throwing himself out a window, his reputation is also left in tatters as Laura links him (falsely) to the sarin gas attack. This keeps the official narrative nice and smooth and make the intelligence and political clean-up afterwards more straightforward.

So will Quinn live? Where now for Carrie? Will season six contain a lot of scenes of Otto Facebook stalking her while crying into his expensive monogrammed handkerchiefs? And when will Saul ever catch a bit of happiness/stop killing people in the name of keeping people safe? Find out tonight on RTÉ Two at 9.30pm.