Get Shorty: Chris O’Dowd as a chewed-up, charming chancer

The official trailer for the TV adaptation of "Get Shorty", starring Chris O'Dowd and Ray Romano. Video: Epix 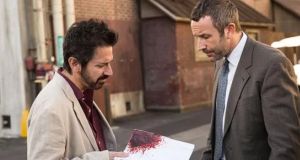 Miles is given a buddy to allow for dialogue

The dirty little secret of Hollywood and, increasingly, television shows is that there are only so many stories to go around.

In Get Shorty (Sky Atlantic, Wednesday, 9pm), which extends the small screen’s fondness for wringing existing titles, like Fargo or Psycho, for several potential seasons of offbeat drama, stories are subject to continual redrafting, ad hoc revisions and punched up pitches – something that writer Davey Holmes does himself with his source material.

Gone is Chili Palmer, the brazen, small time “shylock” and wannabe movie mogul of Elmore Leonard’s sardonic hardboiled novel who, even in his wildest dreams, never imagined being played by John Travolta in a zingy Barry Sonnenfeld movie.

In his place is Miles Daly, a tough Irish enforcer for a Las Vegan loan shark, as long as he is lugubrious, who wields a heavy Roscommon accent like a cudgel. He is played, winningly, by Chris O’Dowd, speaking slow for the benefit of transatlantic comprehensibility. It has the happy effect of making the hero’s position ambiguous: is Miles ahead or is Miles behind?

“I guess I can play unattractive, if that’s what they want, or I can do sex appeal,” reasons Topher Grace, as a vapid actor on the set of a woeful B-Movie. “But they can’t have it both ways.”

Actually, that’s exactly what O’Dowd is doing in Get Shorty, presenting a taciturn thug with chewed up charm, a chancer pitching a movie in Hollywood.

That the script he is pitching is literally soaked with the blood of its writer makes it easy for Miles – a natural script consultant – to effect nifty rewrites. “An Irish guy, actually,” he describes his hero to Ray Romano’s shambling producer. “He has to find the part of his head that knows how to love... And it has funny bits.”

It’s hardly the only moment of self-reference in the show, which often seems to be leaning further into genre conventions than necessary.

Miles is given a buddy, for instance, Louis (Sean Bridgers), mostly to allow for dialogue; an estranged wife he wants to win back; and a daughter to humanise him and retain some sense in the title: “Good night, Shorty,” he bids her on the phone, an old Roscommon blessing.

The sustaining joke of the show, though, is the still effective tug of a shabby Hollywood promise, filmed in appealingly faded hues, where even certain death might be avoided with the right movie pitch.

In one such moment, Miles petitions his boss, Lidia Porto’s formidable Amara, to launder her money through his period drama vanity project. “Can John Stamos be in it?” she wonders. She knows a good swindle when she sees one, and so does the series. That’s showbiz, baby.

‘My legs, stomach and solar plexus turned to jelly when Aretha Franklin started to sing’
5

Mary Trump: The inside story of why she wrote a tell-all memoir
10