No Joe as Philip Boucher-Hayes puts positive stamp on ‘Liveline’ 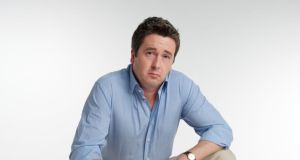 Philip Boucher-Hayes may be an accomplished broadcaster, but as far as callers to Liveline (RTÉ Radio 1, weekdays) are concerned, he’s just an ordinary Joe. Filling in as guest presenter for the week, Boucher-Hayes constantly finds himself being mixed up with regular host Joe Duffy. “My name is Philip, but you can call me whatever you want. People have been calling me Joe all week long,” he tells one caller, Margaret. “You’re definitely not Joe,” Margaret replies, lest Boucher-Hayes start getting notions. “No, I’m definitely not Joe,” he says, sounding only slightly peeved.

Having clarified that he’s no Joe, Boucher-Hayes buffs his own credentials as a Phil-in. On Tuesday, he helms an item that Duffy would be proud of, a discussion that brings closure to the referendum campaign while foreshadowing the illegal adoption scandal. Michelle calls to tell Boucher-Hayes a familiar story: after her mother became pregnant at age 15, she was sent to a mother-and-baby home, where she gave birth in 1974. When Michelle was a month old, mother and baby were told they were going home, and were given a lift back by nuns from the institution.

“They stopped the car at the side of the road, let her out and they took me away with them,” says Michelle, abruptly. Her host is gobsmacked. “Woah, woah, woah,” he interjects. “They dumped her on the side of the road?” Michelle confirms this, adding that the nuns returned with adoption papers a fortnight later, threatening to return her mother to the home if she didn’t sign. (This in 1974, remember, not 1874.) Boucher-Hayes, whose inquisitive style often carries a laconic back-note, sounds genuinely taken aback: “You’re destroying me here.”

There is a happy ending, of sorts. Five years ago, Michelle reunited with her mother, who went on to be a happily married mother of five other children. Following the Yes vote, they were photographed celebrating the result together. Though some anti-abortion campaigners charmingly tweeted Michelle to ask if she would prefer to have been aborted, she has no doubt the result was the right outcome. “When you take choice from women, you damage them completely, and the choice was taken from her,” she says of her “vulnerable” mother.

The discussion ends on an optimistic note, when Margaret – she who assures Boucher-Hayes he is not Duffy – calls in to suggest that families were as much responsible for the appalling treatment of young pregnant women as church or state. Margaret campaigned for a No vote, but hopes that women in crisis pregnancies will get support after the referendum highlighted “all the compassion that women feel for one another”. Michelle agrees.

Boucher-Hayes, for his part, points out the obvious feelgood aspect, that voters from both sides can have “a rational, normal conversation about how we best serve the interests of women in the country”. Such sentiments are noble and heartening, but don’t make for the kind of rip-roaring arguments that keep Liveline bubbling along. He’s definitely not Joe.

That said, after the revelations emerge about the falsifying of birth certificates by an adoption agency, Boucher-Hayes handles the subject with aplomb. He is emotionally generous as 51-year-old Dolores recounts how she only discovered she was adopted two years ago, and was reunited with her birth mother recently. But his tone changes when former flight attendant Isabel recalls taking two babies over to America for adoption during the 1960s. She was sworn to secrecy that the infants were to be handed over, but her conscience is clear. “Those were the luckiest children,” she says. “That’s a moot point,” replies Boucher-Hayes, plainly thrown by the tale. Unfortunately, Liveline isn’t likely to run out of grim stories from the past any time soon.

If such programmes allow the previously silenced to give voice to their experiences, it is largely due to the groundbreaking work of Gay Byrne. This point is underscored during the legendary presenter’s typically forthright appearance on The Ray D’Arcy Show (RTÉ Radio 1, weekdays), as Byrne looks back on his career and ponders his future.

It’s no fuzzily nostalgic trip down memory lane. D’Arcy asks his guest about the remarkable response to the tragic story of Anne Lovett, the Co Longford teenager who died while giving birth in a grotto in 1984, when Byrne’s radio show was flooded with letters telling similarly troubling tales. “It was the first time that slab of stone was moved slightly to uncover all those wriggly things going on underneath that we always suspected were going on,” recalls Byrne. “That was the beginning of all this, culminating in what happened in the referendum.”

D’Arcy sounds faintly in awe of his guest. (Boucher-Hayes, for his part, tells listeners that he speaks more properly when Byrne is in the building.) When D’Arcy says his guest’s integrity was never compromised on The Late Late Show, Byrne deflates him: “That’s a rather grand way of putting it – it was only a TV show.” As for Byrne’s mastery of the airwaves, it came at a price. “I regret the time I gave to this place,” he says of RTÉ.

These days, however, Byrne has more pressing matters on his mind, mainly his ongoing treatment for cancer. He confesses to being “scared witless” at the possibility of resuming chemotherapy, but has no fear of death. “Give me the morphine switch,” he says bluntly.

It’s a characteristically honest interview. The odd tiny lapse in memory aside, he speaks with familiar confidence and wit. it’s a reminder of Byrne’s protean broadcasting abilities, which prized candour at a time when cant was the easier option. There’ll only ever be one Gaybo.

Radio Moment of the Week: A Play with Sole

Drama on One: The Art of Foot-Binding (RTÉ Radio 1, Sunday) is a vividly realised version of Danielle McLaughlin’s short story, bringing together adolescent angst, family tensions and arcane podiatric practices to often icky effect. It follows teenager Becky (Caitriona Ennis) as she rebels against the unsatisfactory home life of her parents Janice (Fiona Bell) and Philip (Arthur Riordan) by experimenting with, yes, foot-binding. It’s a novel premise, which lays bare family faultlines. But it has a visceral edge too, from the unexpected utterance of taboo Anglo-Saxon epithets to the graphic descriptions of feet subjected to binding. Don’t listen to it before a pedicure.