A new documentary on Germaine Greer is among the TV highlights 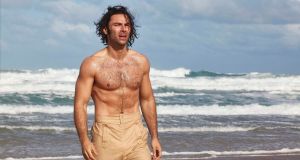 The Graham Norton Show
Friday, TV3, 9pm
The guests on Graham’s sofa include Olympic and world champion sprinter Usain Bolt, who is taking part in Soccer Aid 2018 on Saturday, where he will lead the Rest of the World team as they take on Robbie Williams’s England at Old Trafford. Also on the programme, actor Channing Tatum will be talking about his new stage show Magic Mike Live, comedian Jennifer Saunders and her actor daughter Beattie Edmondson will discuss starring together in the Disney film Patrick, and comedian Rob Brydon will speak about his new comedy Swimming with Men. Plus music from Florence and the Machine, who will perform Hunger.

Arctic Monkeys Live at the BBC
Friday, BBC Two, 11.05pm
In 2006, the Sheffield band’s Whatever People Say I Am, That’s What I’m Not became the fastest-selling debut album in British music history. But in an era where it wasn’t uncommon for heavily hyped groups to make a huge splash with their first records and then sink back into obscurity, Arctic Monkeys have seen their follow-ups go to number one as well.

Their latest album, Tranquility Base Hotel & Casino, has somewhat divided the critics – The Irish Times gave it four stars and suggested that fans would be left scratching their heads with this change in musical direction from the band. They are due to play Dublin’s 3Arena on September 24th and 25th, so this live performance from the legendary Maida Vale studios will offer an opportunity to see how the new songs measure up alongside a few older anthems.

Germaine Bloody Greer
Saturday, BBC Two, 9pm
Who’d be Germaine Greer right now? The writer and feminist has stirred up a media storm with her recent comments on rape, suggesting it is not that serious a crime. This documentary was obviously completed before she made those comments at the Hay Festival, but we may be watching it with a different eye. The programme, directed by Clare Beavan, spends time with Greer as she reminisces about her early days in the eye of the equality storm and muses on the #MeToo movement.

All Round to Mrs Brown’s
Saturday, RTÉ One, 9.15pm
Calling into Agnes – aka Brendan O’Carroll – this week for a cuppa and a chat are former Spice Girl Geri Horner – that would be Ginger Spice – veteran TV presenter Gloria Hunniford and actor Nigel Havers. Also on the show are Birmingham reggae masters UB40.

Summer’s arrived, and you’re probably stocking up on salad ingredients and healthy meals to keep that beach body toned. Well, forget about it. Just get out the spit roast, fill the larder with lard, and get ready to gorge on some of the fattiest foods from Ireland’s history in the new series of Lords and Ladles.

In the first episode, the time-travelling chefs visit Clonalis House in Co Roscommon, home of Pyers and Marguerite O’Conor-Nash, whose most famous ancestor was Rory O’Conor, the last high king of Ireland. So what’s on the menu? This week it’s a 14th-century feast of juicy spit-roasted pig, accompanied by venison boiled in grass (yummy!) and followed by a mouthwatering pig’s belly pudding. This meal is guaranteed to get medieval on your ass – and your tummy, thighs and heart.

Poldark
Sunday, BBC One, 9pm
There’s trouble down t’pit – that’s prime minister Pitt to you – in the latest series of Poldark, the historical drama starring Aidan Turner in the role he was born to play.

Series four finds the country in political turmoil, as Pitt calls a general election, and Poldark realises that if he’s going to stop Truro’s MP George Warleggan from making Cornwall suffer, he’s going to have to go down to Westminster and sort it out himself. When a corn riot erupts in Truro and a merchant is killed, Ross’s brothers-in-law are framed for the murder.

Meanwhile, Demelza is beginning to reap the whirlwind of her infidelity. We’re promised lots of interesting new characters, including a villainous new adversary for Ross, but the big question is: will Aidan Turner whip his shirt off and turn up the summer heat?  – Additional reporting: PA