The feminist academic and writer has been influential and infuriating in equal measure. And so she remains 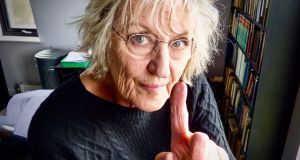 Who said this: “An awful lot of husbands enact a diurnal crime on the body of their wives everyday”? And who said this, about 30 years later: “Most rape is just lazy, just careless, insensitive”?

It is the same person who says of Beyoncé, “Why is she always gotta be f**king naked and have her tits hanging out?” before saying, about 30 seconds later, of her own celebrity nudity: “I’m not saying you have to keep your clothes on.”

The answer – as though you didn’t know already – is Germaine Greer, or, as this pop documentary has it, Germaine Bloody Greer (BBC Two, Saturday, 9pm).

Even before her groundbreaking The Female Eunuch, the Australian academic and writer had been influential and infuriating in equal measure. And so she remains.

These days every public utterance from this second-wave feminist becomes fodder for indignant responses by the third and forth – invariably published under headlines that begin, “No, Germaine Greer!”

Vocally dismissive of the revolutionary potential of the MeToo movement, (because, this doc suggests, she has seen the efforts of so many others atrophy) entirely sceptical (and wrong-headed) about the legitimacy of trans identities, Greer provokes passionate censure from progressives because they feel betrayed.

Yet she is unignorable, still combative and leading the conversation. You may not agree with Germaine, but Greer has always been germane.

One of director Clare Beaven’s neatest devices is to have Greer watch herself, interviewed as a young writer, partly for the pleasure of seeing her admonish the male chauvinist interviewers afresh, but, I suspect, partly to see what she now makes of Germaine Greer.

“I’m not an icon, I’m a person,” the young Greer says at the documentary’s start, but the programme, built up in a media-blitzkrieg chronology, feminist sound bites and the advancing tides of pop music, doesn’t seem to agree.

Her life is extraordinary: born in Australia to a mother she now considers autistic, educated by “demented Irish nuns, all crazy and wonderful”, moving soon to Sydney, then Cambridge, and finally world fame.

Her personality is intoxicating: confident, attractive, provocative, fearsomely individualistic. No movement can quite claim her, though, because she won’t belong to any of them. The Female Eunuch is “one of the iconic books of the women’s liberation movement – of which it is not a part,” says Bea Campbell, an approver. Greer seems at home in the contradiction.

Shown an interview with Clive James, in which the young man suggests that Greer has burnished her own legend at the expense of her true self, she rightly points out that this is true of James. But she doesn’t reflect on its validity for her too.

This documentary, for instance, is an abundance of archive material, clips and interviews: no academic has enjoyed greater exposure because Greer gave so unstintingly of herself.

The alarm of the documentary, then, is to watch her now performing a kind of disappearing act. At home, on a rambling estate, some of her trees have been cut down – Chekhovian enough, but she is also unsentimentally giving away her book collection. Where will she live, Beaven asks. “I have no idea,” Greer says, unbothered.

There have always been two Germaine Greers, though, and if the person is fading, the icon is burning bright.