Game of Thrones is over. How was it for you?

Share your views, feelings and frustrations about the final episode of season 8 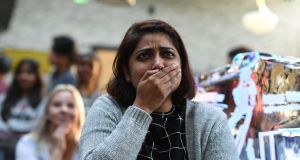 Game of Thrones is over. How was the final episode for you? Series 8 of the HBO drama has divided fans. Some say the showrunners have made a dragon’s dinner of the whole thing. Others have clearly enjoyed the mix of slow-burn drama and, well, burn-everything conflagration.

What is certain is that we have watched it in greater numbers than ever – the penultimate instalment had the biggest audience yet (more than 18 million in the US), and it is expected that the grand finale will break this record. But the Bells episode also has the lowest critical rating on the Rotten Tomatoes site (47 per cent), and the second lowest fan rating (6.8 out of 10) on imdb.com.

Anyway, never mind what they all think. What’s your view?

Share your thoughts on the Game of Thrones finale

You can share your thoughts on episode 6, on season 8 as a whole, or on the whole phenomenon – using this form.

A selection will be published online on Tuesday.

Pat Hume: The woman who never gave up