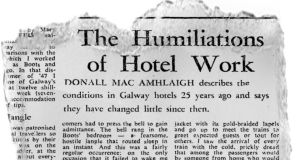 The recent article by Mary Cummins in Women First dealing with the exploitation of hotel workers in Galway set me to making some comparisons with the conditions under which I worked there myself both as Boots and waiter 25 years ago.

In that dismal, dripping summer of 1947 I landed a job in one of Galway’s best-known hotels at 12 shillings and sixpence a week (seven-day) plus food and accommodation and the prospect of tips.

This establishment was patronised mainly by commercial travellers so their tips were conspicuous by their absence. As Boots I was on the lowest rung of the ladder, at the beck and call of just about everyone; guests, manageress, cook and waitress – I took orders from them all. The cleaning maid was the only one, I believe, who had not the privilege of ordering me about.

Duty began at seven in the morning when I cleaned and polished the footwear left outside the bedroom doors overnight and drew great jugs of boiling water up from the kitchens so that the male guests could shave.

This hotel may well have been more old-fashioned than the rest in Galway but nobody seemed to comment on the lack of running water in the rooms. My day – a good 12-hour shift with no nonsense about overtime (being paid for, that is, you did plenty of it) – was filled with a variety of jobs.

There was coal and sticks to be laid on for the cook and ashes to be carted out from the huge iron range in the kitchen, messages to be run, stout to be bottled, bar tended between times and the Dublin trains to be met and the luggage of arriving guests humped along to the hotel. Taxis were a luxury that only a few visitors seemed to indulge in in those days.

At seven in the evening if you were lucky you were free for the rest of the day but even in bed you were on call because the front door was locked at midnight and latecomers had to press the bell to gain admittance. The bell rang in the Boots’ bedroom – a fearsome, hostile jangle that routed sleep in an instant. And this was a fairly regular occurrence: on the only occasion that it failed to wake me one of the staff on her way to first Mass in the Pro-Cathedral found a shivering reveller half asleep on the doorstep. I was regarded a proper reneger after that – a sort of Lundy in reverse.

One of the worst things about being a Boots was the contempt with which most of the staff looked upon you. Neither the manageress nor the cook ever spoke a civil word to me for the few weeks I was there and the latter would put up my meals with the distinct air of someone performing a charity. Also it was a point of honour for her to remind me 50 times a day that as a Boots I wasn’t a patch on my predecessor, a gentleman who, if you could believe the cook, could get through more tasks in a day than Hercules himself. . .

Pay was £1.0.0 a week, fed and found, plus tips: the tips, to be fair, often totalled as much as three pounds in the course of a week.

The matter of waiting on tables presented no difficulty at all, since it was all pretty straightforward stuff, three-course lunches, cold-meat teas, mixed grills, etc. The guests were chummily easygoing, and polished their own shoes; a great many of them were from England on their first holiday since the war and astounded to find that they could have anything and everything they wanted to eat.

“Dost mean t’ tell me lad, ah can have steak and liver and chops all at once? Fa bai gum, our Mum, ’e means it!”

Meeting those sturdy, unashamedly working-class English visitors was my first antidote to the suffocating snobbery that flourished in Ireland then.

Read the original at iti.ms/1V5zTa0