The country was declared a republic on this date – Easter Monday – with 21-gun salutes fired from O’Connell Bridge in Dublin, from Dún Laoghaire pier, and in Cork city centre 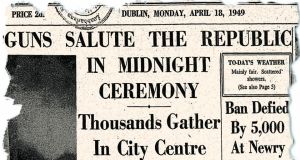 At midnight last night the twenty-six counties officially left the British Commonwealth and cut the last constitutional link with Britain. The description of the state from that moment became the Republic of Ireland.

The birth of the new Republic was welcomed throughout the country in celebrations centred on Dublin, where a 21-gun salute was fired from O’Connell Bridge by men of the 19th Field Battery. To-day, there will be special Church Services and military parades will be held in Dublin and in the provinces.

The firing of the salute, which had been timed to begin at one minute past midnight, was delayed for 3½ minutes by the crowds breaking the cordon round the guns.

Expectant crowds thronged the streets of Dublin from early yesterday. The Tricolour flew from shops, business premises and public buildings, while in the suburbs the Papal flag was flown from many dwellings.

Among the crowd, many of whom wore souvenir emblems, were people from all parts of the country, including Northern Ireland, and a group of supporters of the Scottish junior football team which had played in the city earlier in the day.

As the time for the firing approached, a solid mass of people jammed the thoroughfare from O’Connell Bridge to the G.P.O. Every possible vantage point was made use of. Traffic was diverted. At 11.45pm, as blazing tar barrels on the Dublin hills could be seen in the city centre, O’Connell street became a blaze of light from searchlight batteries ringing the city. A few minutes after midnight the salute from the guns began, with ten-second intervals between the rounds.

A detachment of about 150 men of the FCA then stepped forward and fired a feu de joie from behind the battery, and buglers of the Army No 1 Band sounded the Reveille.

The cheers of the watching thousands broke out afresh. Men, women and children shouted “Up the Republic,” while groups of young people with accordeons and other musical instruments joined in singing national airs. Open air ceilidhthe had been arranged at various points, and dancing continued until early this morning.

Many people fainted in the dense crowd on O’Connell Bridge, and were treated by ambulance men. About 100 St. John Ambulance Brigade men were on duty, and they treated 40 cases of collapse, most of them women. The Dublin Fire Brigade ambulance attended to eight cases. A small number was treated by Army ambulance men.

In Dun Laoghaire harbour the corvettes, Macha and Cliona, were illuminated. Other boats in the harbour were bedecked with flags, and the yacht clubs had the Tricolour flying. Public buildings, including the Town Hall, were decorated. Twenty-one guns on the East Pier fired a welcome to the Republic at a minute past midnight.

Lieut. Pierce Purcell hoisted the Tricolour over the lighthouse tower. As the flag reached the top of the pole it was pin-pointed by searchlights from the two naval vessels. A roll of drums and the sounding of the Reveille brought the ceremony to an end.

During the day in Dun Laoghaire the 6th Battalion of the Old I.R.A.. marched to Dean’s Grange Cemetery, accompanied by the Blackrock Pipe Band, the Dun Laoghaire Fife and Drum Band, and the Maria Mater Boys’ Band.

In Cork, thousands of citizens assembled in Parnell place and the South Mall. Heralded by a fanfare of trumpets, the Proclamation of 1916 was read by Mr. Tom Barry, a commandant-general of the old I.R.A., from the steps of the City Hall. The Tricolour was then hoisted on the roof of the flood-lit building.

A salute of 21 guns, fired by an Army battery, followed. Then came a feu de joie from the roof of the City Hall, fired by a party from the 4th Infantry Battalion.

The ceremony ended with the playing of “A Soldier’s Song” by the No. 2 Army Band.

At one minute past midnight Radio Éireann broadcast this statement: “These are the first moments of Easter Monday, April 18th, 1949. Since midnight, for the first time in history, international recognition has been accorded to the Republic of Ireland.

“Our listeners will join us is asking God’s blessing on the Republic, and in praying that it will not be long until the sovereignty of the Republic extends over the whole of our national territory.”

Caught by the fuzz pedal: Gaz Coombes on his top Supergrass songs
9