‘Famous and Fighting Crime’: A bit too much like a human fox hunt 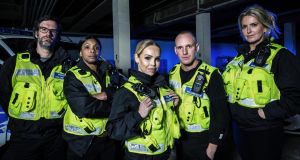 Channel 4 has reached the point in its programming Venn diagram where the popularity of their fly-on-the-wall documentaries has overlapped with viewers’ appetites for reality television, creating its newest show: Famous and Fighting Crime. Which is more serious and less Alan Partridge than it sounds. This is not some sort of sub-superhero vigilante japes with Christopher Biggins encased in Lycra, it’s Training Day starring someone from 8 Out of Ten Cats.

The series follows five celebs such as Sandi Bogle from Gogglebox and Jamie Laing from Made in Chelsea as they join officers as part of their special volunteer initiative in the Cambridge Constabulary, responding to actual emergency calls.

This craven desire to see celebrities in danger has moved from the almost genteel occurrence of swallowing the scrotum of jungle animals or throwing themselves upside down on an ice-rink for our entertainment. Bored of the easy reality telly narrative of self-flagellation resulting in inevitable redemption, audiences now want to see H from Steps being threatened with a broken bottle by a wayward drunk.

It has got to the stage where viewers would rather watch someone from Loose Women chase a shoplifter down an alleyway like an unseen episode of The Bill than witness an actual trainee police officer do their real job. The tenuous nature of modern celebrity has given audiences a strange sadistic streak, we want to punish those more telegenic, more successful and wealthier than us, we want to see our childhood heroes cry in a redundant bid to make ourselves feel better for being trapped in our anonymous lives.

Knowing the backstory of the various famous faces they’ve rounded up also adds an extra element of titillation to this questionable series. For example, how will TV presenter/activist Katie Piper cope with the perilous situations the officers are thrown into, given her past as an acid-attack survivor? She is visibly nervous throughout the training exercises, ruminating on her own experiences as someone who has been attacked and assaulted, she wonders how useful she will be when faced with a difficult scenario.

Then there’s model and presenter Penny Lancaster who also breaks down in tears during an aggressive role-playing task, triggering her memories of escaping a predatory situation when she was a young girl. The traumatic events that the women describe are not necessary to understand the obvious difficulties of being a police officer. It’s empty voyeurism disguised as empathy.

At the other end of the scale is Made in Chelsea’s Laing who can’t wait to “bust some drug lords”, relishing the opportunity to feel like he’s in a real-life video game. The socialite and heir to the McVitie’s fortune has trouble understanding what “payday weekend” is, which is natural given his charmed life as a cosseted trustafarian but he is eager to get actively involved in the assignment. There is something extremely unsettling about watching the gleeful ex-public schoolboy chasing down and apprehending a violent drunk, “I feel like I’ve scored a goal for the first time!” he beams, basking in his new-found power.

Whereas Brixton resident Bogle is conflicted about her involvement, she is sympathetic to those who have been affected by drug addiction and has seen the reckless hopelessness of poverty first hand. Her compassion and understanding are at odds with the conservative views of Lancaster who has been protected by security throughout her marriage to Rod Stewart and believes that the police must always be “respected”. As she enjoys her very first KFC (to the astonishment of her fellow colleagues) there is the distinct aroma of class tourism in her participation. She seems to enjoy the jolly novelty of working, the adrenaline rush of doing something that has genuine consequences and doesn’t involve a hair and make-up team.

Running through housing estates chasing down those who’ve ended up outside the law may feel like a human fox hunt or a gritty episode of Challenge Anneka for some of the celebrities but for those lost in this world, the reality isn’t quite so exhilarating.