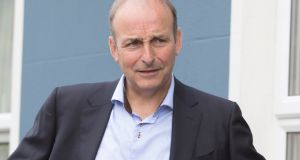 It may well be that all politics is local, as the late US congressman Tip O’Neill’s well-burnished chestnut claims, but the national broadcaster doesn’t see things that way, at least according to Damien Tiernan. Formerly RTÉ’s southeast correspondent, Tiernan recently spoke of his frustration at the network’s supposed slashing of its regional coverage. So it’s no surprise that Tiernan sounds at home in his new role as presenter of Déise Today (WLR, weekdays), the mid-morning magazine show on Waterford’s local station.

At first glance, moving from national media to a smaller regional operation might seem a drop down for Tiernan, but that is to massively misunderstand and underestimate the power of local radio in Ireland. Notwithstanding the fact that this column focuses on national channels (for reasons of nationwide availability rather than blinkered metropolitan elitism, or at least that’s what I tell myself), regional stations are the radio destinations of choice throughout much of the country.

The likes of Highland Radio in Donegal dominate the airwaves in their respective counties, while presenters such as the outspoken Neil Prendeville of Red FM in Cork have profiles that surpass peers on national stations.

Tiernan’s show neatly illustrates why local programming has such audience appeal. In his first week as host (taking over from previous incumbent Eamon Keane, himself a former national radio presenter on Newstalk), he examines the social, economic and, yes, political issues facing Waterford, but also covers human interest topics with a local twist.

There’s an illuminating discussion about local retail conditions, as businessman Tony Fitzgerald contrasts the sparse state investment in Waterford city centre with that in Dublin. “They’ve got to give something back,” Fitzgerald says, “we’re a forgotten city.” For good measure, he compliments Tiernan on his new post: “You’re a huge asset to us.” Tiernan’s knowledge of the territory is obvious, but he also manages to make a particularly niche topic accessible to the outsider.

There are other items that one expects on community-focused stations, such as tributes to recently deceased local notables. As Tiernan hears stories about a well-known Tramore GP, the late Dr Tom Kehoe, the tone is fond and even jovial rather than sombre. There are also the de rigueur lighter moments, as when Tiernan prefaces a conversation on the old practice of serving food at nightclubs with the dread words, “Now we’ll have a bit of fun”. The presenter’s memories of chicken curries that would “pass through you faster than a Ferrari” captures the air of determined jocularity.

Throughout it all, Tiernan sounds comfortable as a talk show host, no matter who he is talking to. If there’s a problem, it’s when he encounters people whose viewpoint isn’t sufficiently Déise-centric, as during Tuesday’s interview with Fianna Fáil leader Micheál Martin.

Unsurprisingly, the conversation largely concerns the proposed construction of a second cath lab that can provide 24-hour care for cardiac patients at University Hospital Waterford, the region’s single biggest political issue judging by the airtime it receives. Tiernan repeatedly asks Martin why he hasn’t made the delivery of such a facility a condition for supporting the Government. When Martin says that every issue can’t be a red line – “you’d be pulling down the government every week” – Tiernan suggests it would be a different case if it were in the TD’s home county of Cork. “Are people’s lives here worth less?” he asks.

Martin is annoyed – “that’s very pejorative language” – but his host is unapologetic. He’s made his point: local audiences 1; national politicians 0. It’s early days, but Tiernan has already settled into his role of ensuring the Waterford voices are heard, if not always listened to.

Martin has a less torrid time on Wednesday, when he appears on the Pat Kenny Show (Newstalk, weekdays). If Kenny doesn’t take a confrontational approach to his guest, it’s because he wants to offer an answer to the most intractable question of our times: how to solve the Brexit mess.

As he discusses British objections to the Border backstop, Kenny’s tone changes from one of interrogator to that of generous benefactor. “One of the ideas that I came up with is a rolling backstop,” he eagerly tells Martin, “and anyone I offered it to has said ‘Yeah, there’s a grain of an idea there’.” The host parks questioning his guest to expand on his idea, sounding more excited as he explains how there could be a rolling time limit set at five years, reduced as certain negotiation targets are met.

“If Brexiteers have the confidence that they can do this, what are they afraid of?” Kenny asks Martin. It’s a fair enough question, if the host’s idea were an actual policy rather than a conversational concept. As it is, Martin hums and haws by way of kicking the idea to touch. The interview is standard fare otherwise, but it’s always entertaining when Kenny allows a glimpse of how his mind works, unpredictable and slightly baffling as that can be.

The short conversation deals with personal history, the importance of branding and the lowly place of design in the Irish cultural firmament. There’s a wry analysis of teal, the colour now sported by the airline’s fleet – “a bit more sophisticated than Kelly green or the other 40 shades,” says Nolan. He also observes how imagery reinforces the affinity people feel for an “iconic” Irish brand like Aer Lingus, even though it’s now internationally-owned. In contrast, Nolan says of the Irish-owned Ryanair, “I feel no warmth or kinship”. It’s a quietly stimulating item on culture and commerce, how image and design can shape our feelings of identity. It’s not only politics that are local.

Radio Moment of the Week: Dad’s the word for O’Leary

Normally a scourge of political cant, Olivia O’Leary’s essay for Tuesday’s Drivetime (RTÉ Radio 1, weekdays) shows her gift for poignant vignette. Prompted by the anxiety of the news, she shares memories of her father, who “managed to make the world seem both safe and magical”. She vividly recalls his games and lullabies, before telling how he became ill with Parkinson’s at age 49. Finally, she remembers their final conversation, with “that phrase, like an arm around your shoulder, ‘child of mine’.” Irresistibly bittersweet and moving.