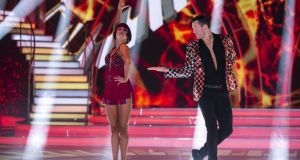 It’s “switch up” week on Dancing With the Stars which means new partner combinations (tentative “hurrah”) but no eliminations (deafening boos).

The gimmick is that the celebs are separated from their regular pro hoofers and paired with another member of the crew. Yet this surely overestimates how invested we are in the celeb/dancer chemistry – invariably fizzle-free on DWTS compared with the transgressive sizzle of the BBC’s Strictly Come Dancing (it is telling that, to the best of anyone’s knowledge, there is no DWTS equivalent of the “Strictly Curse”).

The star of the evening is country singer Cliona Hagan, who scores 28 – including the first 10 of the season (from Julian Benson, dressed as if in the process of being devoured by a triffid). She delivers a samba, with Vitali Kozmin, to Taki Taki by DJ Snake (which sounds like an anagram of something rude but isn’t).

However the real winner tonight is us the audience as we are treated to an un-billed cameo by 2018 floorboard scorcher Mary Morrissey. “The Marty party is back,” says Nicky Byrne, his quiff practically performing backflips as Morrissey announces the voting lines are open (don’t get excited the results don’t count and are instead carried forward).

The episode kicks off with Peter Stringer, aka the “Rugby God” (as Nicky Byrne is known to refer to him in his sleep), and Valeria Milova doing to cha cha to Body, by Loud Luxury Featuring Brando (no, you have no idea who or what that is and yes, you are ancient).

The criticism is echoed by Benson – who pleads with Stringer to work on his “hip isolation”. “Thrust, thrust, thrust…aaaand roll, “ says the judge. “Strings” – as he was presumably referred to in his rugby days – scores a “could to better” 16.

Then it’s likeable Young Offenders star Demi Isaac Oviawe, studying for her Leaving Cert and undertaking an RTÉ talent show in the same year (one’s a soul-deadening rite of passage with the potential to scar you for life – the other is a state examination etc etc). She has been partnered with Robert Rowinski to dance a Charleston to Wings by Little Mix (as opposed to dancing to something by Wings, obviously a far better idea).

What hasn’t changed is the judges’ harsh opinion of her efforts. Her Charleston is “more caterpillar than butterfly” says Brian Redmond. “We were worried this is a switch up that would not work,” he adds. That line – a little too practised – earns a mild rebuke from Isaac Oviawe, who appears genuinely baffled by the negativity (later she also claims not to know what a begrudger is – but that’s okay, neither does Nicky Byrne, despite being a member of Westlife).

The switcheroo continues with a paso doble by Fred Cooke and Emily Barker. Actually make that a paso “wobbly”, with Cooke reprising his now familiar (over-familiar? existentially terrifying?) human cartoon character routine, to the strains of Y Viva Espana by Back Lace.

He’d dressed as a matador – or at least Jedward in panto playing a matador – and mimes tiny bull horns (please never again mime tiny bull horns, on television or anywhere else, Fred Cooke). “It was more Benny Hill than bullfighter,” observes Julian Benson, harshly yet truthfully.

Early frontrunner Johnny Ward – a star of Love/Hate, and thus the designated “bad boy” – treats us to a blast from the indie-rock past in the form of Are You Gonna Be My Girl by Jet. That’s in service of quickstep with Ksenia Zsikhotska that is indeed lightning fast. Next week it’s the rumba – a more delicate routine which Loraine Barry hopes will give the hot to trot Ward an opportunity to slow down.

Over on Twitter the consensus is that the panel is consistently under-marking Ward. With an irate public at his back, he surely has a decent chance of making it to the final shakedown.

Next is footballer/his own promotional cardboard cutout come to life Denis Bastick, jiving with Giulia Dotta to Great Balls of Fire by Jerry Lee Lewis. This has everything: air guitar, air piano and Bastick in a glittering chequerboard jacket (he looks like Elton John if Elton John had played centre-half back on the Dublin football four-in-a-row team). The judges are impressed – and not just by Bastick’s jacket (though it clearly sways them massively).

Bastick and Dotta are followed by Clelia Murphy, previously of Fair City, and John Nolan, formerly dance partner to Mairéad Ronan. They’ve drawn the quickstep short straw – for which they are accompanied by Stop Me From Falling, the most obscure song ever released by Kylie Minogue (it is good to know DWTS, along with everyone else, is offering deep cut cap-doffs to Kylie fans). Their partnership wasn’t off to the most triumphant of starts, with Murphy stomping on Nolan’s toes last week. But they bring it when it counts and receive a scorching 24.

Mairéad Ronan, for her part, is dancing with Kai Widdrington, taking a sultry salsa to pop villain Pitfall (assisted by Jennifer Lopez). “That’s how you do switch up week, girl,” trills half man/half triffid Benson. “At one point I didn’t think I was looking at Mairéad Ronan.” Brian Redmond goes further, predicting the RTÉ presenter is “on her way to becoming a luscious latin lady”. This is more than just hyperbole and she receives a score of 25.

Next week the contestants reunite with their regular partners and the eliminations will be decided by dance-off. After tonight’s shoulder shrug of an episode, the injection of sudden death will be a switch up that’s overdue.