The TV chef’s massive Dublin restaurant opened to great fanfare, but things did not go to plan 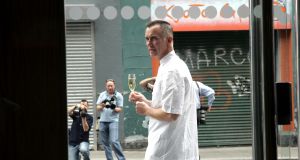 Gary Rhodes, who has died at the age of 59, was one of the original British TV chefs, known for his spiky hairstyle, cheeky-chappie delivery and love of traditional British food. He was also a successful restaurateur, who opened a string of businesses in the UK, the Caribbean, Dubai and Ireland, where Rhodes D7 opened in Dublin in July 2006 and closed three years later.

After first appearing on TV at the age of 27, Rhodes went on to front several prime-time cooking and culinary travel shows for the BBC. Rhodes Around Britain was his debut series, followed by Gary’s Perfect Christmas, New British Classics, Rhodes Around India and Rhodes Around China. He also hosted MasterChef USA for two seasons, in 2000 and 2001.

As well as his media career, Rhodes proved to be a shrewd and successful restaurateur, earning Michelin stars for five of the businesses he ran. His first overseas restaurant was in Grenada, in the Caribbean.

Two years later, in July 2006, he opened Rhodes D7, on Capel Street in Dublin, on a busy corner site. The 250-seat modern brasserie opened to a fanfare, amid doubts expressed about his choice of location.

Tom Doorley, reviewing Rhodes D7 in August 2006, wrote: “Some claim not to know where Capel Street is; others – mainly lawyers – can’t get away with this and confine themselves to saying that Rhodes D77 is on the wrong part of Capel Street. Their partners chime in and say they wouldn’t fancy walking there at night.”

For his Dublin opening, Rhodes moved away from the British classics that had made his name. In an interview in The Irish Times he said: “One thing I’ve been absolutely sure of from the beginning is that what I’m not going to try to do is take a British restaurant to Dublin. I want to try to create an Irish restaurant. I have that British label hanging around my neck, but it’s not as simple as that. I’ve always chosen British dishes that I’ve wanted to add to – a new twist, a new edge, the French influence. And that’s exactly what I want to do in Rhodes D7. I want to work with the great old Irish flavours and ingredients, and add my personality to them.”

He also demonstrated an appreciation of the importance of provenance and local sourcing that was not as common then as it is now. “ I want to make sure that the Cheddar we use is an Irish Cheddar. I don’t want to use a Cheddar from the [English] West Country. And I want to do something with Irish gammon, as well. So I want to find a farmer who can provide gammon that is just so sensational that we can feature it, and use the name of the place that we’ve sourced it from. I want people in Rhodes D7 to know that what they’re eating has come from home soil.”

But despite the high-profile name above the door, the restaurant struggled. By December 2006, five months after opening, it was advertising a €10 “business lunch”, perhaps hoping to bring in customers from the courts and legal offices nearby. The restaurant closed in early January 2009 “for renovations” and was due to reopen in March, but its doors stayed closed for good.

The size of the premises – 250-seaters were almost unheard of in Dublin at that time – was thought to be a factor in its failure. The restaurant may also have been a bit ahead of its time. Capel Street is now home to a string of restaurants, many of them Asian, along with Brother Hubbard North, which moved into the Rhodes D7 site in 2017 and now operates a 300-seat cafe, restaurant, shop and coffee roastery.

The Irish food writer and cookbook editor Orla Broderick, who worked closely with him in London in the mid-1990s on his TV series and some of his 18 cookbooks, describes him as “a true perfectionist, totally original and one of the most influential chefs of our time”.

Broderick traces Rhodes’s love of British classic dishes to his childhood. “He grew up in a single-parent family. His mum had to go out to work, so he took it upon himself to start to cook as a way of helping her. That was where his love of food came from.

“What he loved to do was fine-tune the great British classics. He would take old recipes, turn them on their head and make them the best. If you cook Gary’s shepherd’s pie pie or his treacle pudding, I can guarantee you that it will be faultless.”

His recipes were rigorously tested. “We would make and remake and remake,” Broderick says. “I have never seen anyone who strived for perfection in the same way Gary Rhodes did.”

The chef was very aware that his spiky, gelled hair had become his trademark. “I never saw him without it done,” Broderick says.

Rhodes was back in the news in Ireland in April 2015, when he collaborated with Camile Thai Kitchen on a recipe promotion, designing a healthier than usual version of priw wan, better known as sweet-and-sour chicken, sweetened with honey and served with wild and brown rice.

By that time Rhodes was living in Dubai with his wife, Jennie, with whom he had two children, Samuel and George. He operated restaurants in hotels owned by the Marriott group there, and it is reported that he was at work in one of them on the day of his death.