The best shows on Netflix and Amazon in October

There are scares aplenty in store next month 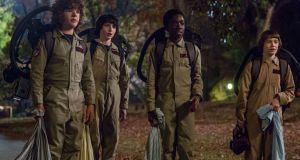 Turn it up to Eleven! Chomp on that rental furniture, Winona!

The Death and Life of Marsha P Johnson

This moving and timely documentary from David French, (the director of the incendiary, Academy Award-nominated Aids epidemic feature How to Survive a Plague), again focuses on ordinary people forced into becoming activists due to limitations put on their very existence.

The documentary attempts to re-examine the circumstances around the death of the legendary “street queen” Marsha P Johnson, a transgender gay rights revolutionary whose body was found floating in the Hudson River in 1992. Activist Victoria Cruz works through the case trying to solve the mystery behind the death of the “Rosa Parks of the gay rights movement”, the person who embodied the historic Stonewall Riots.

Lore might end up being an interesting test case: the space orbiting monkey of podcasts turned into TV shows. As Aaron Mahnke’s popular pod has a whimsical camp-fire storytelling aspect to it, the horror-inflected show’s televisual transition was possibly a lot easier to conceive of, compared to the more straight-forward documentary pods. Aided by executive producers of The X Files and The Walking Dead, the six-episode anthology show heads to Amazon Prime free from the familiar interruptions encouraging you to use Squarespace or try out Blue Apron.

Using animation, documentary footage and dramatic sequences, the series is the supposed reality behind those historic tales that have become part of the horror mythology from exorcisms and creepy dolls to seances. With the brain of The Twilight Zone stitched to the body of American Horror Story, the monster mash-up that is Lore may be the bump in the night needed to set viewers up for the rest of the scary season.

Apparently Mindhunter is supposed to be spelled with all caps because nothing says serious, serial killer drama than giant capital letters screaming at you like a deranged psychopath. That aside, the show comes from the king of moody Americana David Fincher and British director Asif Kapadia. Set in 1979 it follows two FBI agents as they begin to use the unorthodox method (at the time) of interviewing imprisoned serial killers to gain insight into the minds of these criminals and attempt to solve ongoing cases.

Mindhunter may sound completely hackneyed, with a plotline that comes straight from an average episode of Criminal Minds. But Fincher is known for his attention to source material and detail, which he used to perfection in the masterpiece that is Zodiac. So it might yet be one of this year’s highlights.

The Meyerowitz Stories (New and Selected)

Director Noah Baumbach has become the master of the awkward family drama. From The Squid and the Whale to Margot at the Wedding, he’s carved out a niche within the quiet, deranged suffocation that stews below the surface of every family, and only raises its head once the wineglass has been refilled that one time too many.

The Meyerowitz Stories is Baumbach’s take on those iconic literary and filmic tales of domestic dysfunction. With its focus on an unknowable, roguish father figure, comparisons will be made with Wes Anderson’s Royal Tenenbaums. Although unlike Anderson’s sweetly sensitive, surreal masterwork, Baumbach’s offering is shot through with biting cynicism rather than soaked in sentimentality. The tweeness is replaced by crippling anxiety and ferocious anger.

Ben Stiller plays his usual uptight, control-freak character, a successful accountant and son of a renowned sculptor (Dustin Hoffman) whose family (including a scene-stealing turn by Emma Thompson) have come together to attempt to create a retrospective of their father’s work.

Kingdom of Us is a powerful documentary that explores the devastating effects of suicide. Filmmaker Lucy Cohen spent three years following the wife and seven children of Paul Shanks as they attempt to come to terms with his death. The film, with its delicate but unflinching eye, tells the children’s story and captures their grief and trauma, their raw anger and pain six years after their father’s death, brimming with questions that remain unanswered.

Featuring old home video footage mixed with images from the picturesque English Midlands landscape, it’s a meditation on loss and survival and the hopefulness of youth that emerges from the darkness.

Back for its third and sadly final season, Red Oaks’s breezy, knockabout fun obviously failed to win over enough of a solid viewership. Starring Submarine’s Craig Roberts (and his brilliantly expressive face) as a tennis ace desperate to become a professional filmmaker, it’s a charming coming-of-age story that features a whole host of 1980s movie alumni from Jennifer Grey to Paul Reiser and Richard Kind.

Compared to the anarchic, 1980s parody of Wet Hot American Summer, Red Oaks was a touch too straight and formulaic but for all its flaws it will always have a home in the heart of those who grew up on a diet of Michael J Fox classics.

The kids are back! And they’ve probably brought some soul-sucking Demogorgon with them. With over a year wait and countless award nominations, cheap imitators, Winona gifs, parodies and backlash, Stranger Things 2 has a lot to live up to, and impatient audiences cannot live on Eggos alone.

Those Duffer Brothers have been relatively secretive with the details other than to say as they are “movie guys” this is a sequel rather than a second series, meaning it has the potential to go anywhere. Which sounds a bit like a cop-out but once things are turned up to Eleven, Winona is still chomping on every bit of rental furniture as Joyce, and Steve Harrington’s hair is whipped into a Glenn Medeiros mullet, we’ll be happy to hitch a ride back to Hawkins one more time.

Joan Didion: The Center Will Not Hold

Finally, the documentary about one of the most influential and iconic writers in modern history is almost here: it only took five decades. Directed by her nephew, actor and producer Griffin Dunne, The Center Will Not Hold tells the story of Joan Didion: journalist, essayist, critic, novelist, screenwriter, soothsayer, psychic, and force of nature.

It follows Didion in intimate detail from her days at Vogue in the 1950s to the truth she spilled forth in her groundbreaking writing throughout the 1960s, her seminal books and novels and her introduction to Hollywood through her screenwriting in the 1970s and 1980s. It also explores the human behind the cool gaze and cigarette haze, her relationship and creative partnership with her husband John Dunne and the hurricane of grief that tore through her later life with the death of both Dunne and her daughter Quintana, in quick succession. This unthinkable pain forged the astonishing book The Year of Magical Thinking and introduced Didion to a whole new audience.

Emily in Paris: If it was Dublin, she’d be shifting Colm Meaney in the Leprechaun Museum
7