Gay Byrne: how he broke taboos and shook up conservative – and liberal – Ireland

He lit the fire which engulfed guests in controversy, then sat back and watched the blaze 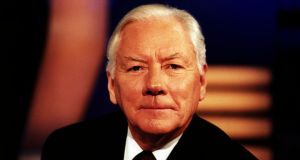 Gay Byrne had a superb instinct for a story. He spoke of the need to catch an issue “at the crest of its wave”. Photograph: RTÉ

He was a showman, Gay Byrne, first and foremost, but he was a showman in Ireland, and that made all the difference. He made his name with a national broadcaster that was set up primarily to make the Irish people submit to government. That, in Byrne’s earliest years with RTÉ, meant that fear of the belt of the crozier still prevailed within the station’s governing authority. What could be better for someone whose instinct was for pushing out the limits of what was entertaining?

Take the Bishop and the Nightie story from a Late Late Show on a Saturday night in 1966. The nightie story would not have survived till the morning after the show on which it was told – Byrne asked a woman what colour nightie she’d worn on her wedding night and she replied that she might not have worn a nightie at all. Sweetly funny. But then the Bishop of Clonfert weighed in, denouncing the show as “disgraceful” and “immoral”, and a legend was born.

In the same year, as historian Diarmaid Ferriter has pointed out, one of Archbishop John Charles McQuaid’s diocesan priests suggested “it would be interesting to know the numbers of teenage ‘shot gun’ marriages in Dublin” since the show started in 1962. Colm Tóibín wrote that the show came along “when life was never better and the still water of Irish life was crying out for a good stir.” Byrne, the impresario, “brought dissent to the masses”.

RTÉ complained abjectly to McQuaid that it could not act as its own policeman, but it had another motive for letting Byrne run – he was building up a massive audience and a lucrative advertising income followed. By 1971, according to journalist and writer Nell McCafferty, Byrne “had only to nod his head in the direction of a topic on The Late Late Show and it became the staple of national conversation”.

Byrne had a superb instinct for a story. He spoke of the need to catch an issue “at the crest of its wave”.

McCafferty describes how he gave over a show that year to the newly formed Irish Women’s Liberation Movement, the audience “packed with the sisterhood”. She notes that Byrne referred to the historian Mary Cullen as “the wife of a psychiatrist” and that he allowed a furious Garret FitzGerald to bustle on to the set to protest at Mary Kenny’s depiction of the Dáil as a “male bastion.” It worked: “Byrne sat back, the women sat up, and the show ignited.” On another occasion, he famously unfurled a condom for the cameras.

Not all of the bishop stories are amusing. Fast forward to 1993 when Byrne had Annie Murphy on the show to talk about her revelation that Bishop Eamonn Casey had made her pregnant and, when she had refused to put her baby up for adoption, left her to raise their son alone. Her son had grown up a fine young man, she said. Byrne, whose questioning of this frail and dignified woman had been cold, then stated that he’d be fine if he was “half the man his father was”. Murphy felt the sting of it, and walked out. She later graciously forgave him.

In an interview with Keith Duggan in The Irish Times in 2010, Byrne commented on what he saw as the Irish delusion that “Holy Mother Church is looking after us and we are so beautiful” while beneath the surface, horrific experiences marked everyday life in apparently ordinary places. He blamed Éamon de Valera, who “taught us to believe two contradictory things at the same time and to somehow rationalise them. It is there in that answer we all use, ‘yes and no’.”

Perhaps his finest hour as a serious broadcaster came in the days that followed the discovery of 15-year-old Ann Lovett and her stillborn son at the foot of a statue of the Blessed Virgin in a grotto in Co Longford in 1984. After carrying a report from Granard, where local people closed ranks against the media and maintained they knew nothing, Byrne devoted his morning radio show to presenting, in a stark and plain way, readings of letters sent in by listeners. It was a deluge of pain and grief. Letters about the hidden histories of Irish women and girls, of rape, beatings, abortion, banishment and, in one case, a servant who locked herself away, gave birth and killed the baby. Byrne said afterwards: “That was the first stone lifted to discover what lay underneath in this country.”

Beyond the stage persona, he let it be known that he voted Fianna Fáil and was Catholic; he backed divorce in certain cases, and gay marriage.

He was tipped as the most likely to win the presidency in 2011 but at the last minute declared he would not run. He supported tax breaks for the rich, and after a trusted financial adviser lost him millions from his private fortune, he appeared unappealingly hungry for money, returning again and again to RTÉ after retirement. He characterised the EU as “mad people in Brussels” and claimed recently that if Brexit went ahead Ireland should also leave.

Comedian Mario Rosenstock has a brilliant and quite affectionate sketch of Gaybo interviewing Gaybo, an assembly of Byrne’s rather pantomimish showbiz gestures and stock phrases.

His face when, on his programme about religious belief in 2015, Stephen Fry denounced God for creating insects that make children blind and other cruelties, was such an ostentatious mask of outraged disapproval that it has become a widely used meme. But he was a man of variety, a consummate broadcaster. Few could range so widely and with such nimble feet. He praised the Northern punk band Stiff Little Fingers in his Sunday World column in 1978, though he commented that their name “sounded a bit rude”. He hosted the Rose of Tralee in its unreconstructed “lovely girls” phase.

He nodded in a priestly manner when Sinead O’Connor confided her troubles. He let the foolish old Tory Peter Brooke, then British secretary of state for Northern Ireland, sing Oh My Darling Clementine, shortly after a sectarian massacre by the IRA in 1992. He let Terry Keane brag of her affair with Charles Haughey in 1999. He let Oliver Reed fall about pissed. He plámassed Pádraig Flynn, then an EU commissioner, into making self-destructive revelations about his attitudes to his financial affairs. He ambushed Mary Robinson with a question about a decade-old comment she had made about being a socialist. He called Martin McGuinness a liar and Gerry Adams “the most controversial man in Ireland”. And he sat back and watched the blaze.

“We looked at new ways of entertaining and that was it,” he said once. “The whole country’s banjaxed,” he used to exclaim. Hard to argue with that, still.