This lavish remake is Perry Mason, but not as we know him

TV review: HBO private-eye series is hard to warm to when it’s as bleak as the day is long 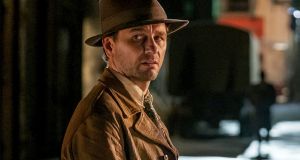 Was the world really crying out for a Perry Mason reboot? Raymond Burr’s crime-fighting lawyer occupies a beloved place in the pre-history of the modern crime procedural, somewhere in the vicinity of Murder, She Wrote and Matlock. Yet do many among us have a grown-up memory of having watched it? It feels like something from our parents’ childhoods – a show that exists as a memory of a memory.

And yet, here we are, with an all-new Mason, receiving the lavish HBO treatment (Sky Atlantic, Monday). Because it’s 2020 and everything must be complicated, “new” in this case means more vintage than the 1950s original, with the setting bumped back a generation to Los Angeles between the wars. And “lavish” is another way of saying Perry 2.0 is supremely grim and grimy.

The showrunners err in assuming their hangdog version of Mason, with crow’s feet under his crow’s feet, to be deeply fascinating

How grim? Well in the first episode, a baby dies having had their eyes sewn open. A chap belches at a cafe table so aggressively it seems HBO is about to reprise the barfing gentleman sketch from Monty Python’s the Meaning Of Life. There are recurring jokes regarding the egg-spattered tie – actually it’s mustard – sported by the performatively dishevelled title character (the Americans’ Matthew Rhys).

All of this is dazzlingly evoked, courtesy of the blockbuster production values that feature as standard with HBO. Alas, much else is unfocused and under-cooked. In particular, showrunners Rolin Jones (Boardwalk Empire) and Ron Fitzgerald (Friday Night Lights) err in assuming their hangdog version of Mason, with crow’s feet under his crow’s feet, to be deeply fascinating (he is in fact completely pathetic).

He isn’t even a lawyer yet. And what is the point of Perry Mason if not to showboat in court? Jones and Fitzgerald don’t have a clear answer. So they instead reimagine Mason as a down-and-out private eye, a noir creature who has seemingly crawled out of a James Ellroy fever dream.

Thirties LA is grippingly conjured, the action playing out against the backdrop of the evangelical revival that swept southern California through that period. This is a glossed-over chapter of LA history and it brings a whiff of fire and brimstone to the City of Angels.

The dead baby is the cornerstone of Mason’s new case. When the child is abducted and killed a concerned mogul hires Mason to find the murderers and clear the names of the parents.

Our careworn anti-hero must, in addition, negotiate a testy relationship with lawyer mentor EB Jonathan (John Lithgow) while exchanging quippy banter with his assistant Della Street (Juliet Rylance). He is also required to find time for frisky liaisons with neighbour Lupe (Veronica Falcón), a pilot who wants to buy Mason’s failing family farm to make space of her airstrip.

So this is Perry Mason but not as we know it. As reboots go the new series is certainly not afraid of taking risks or of blaspheming the source material. Yet it’s hard to warm to a show that is bleak all the way down and all the day long. Oh for the clouds to part and a shard of sunlight poke through.

Rhys, to his credit, imbues Mason with a wounded, rumpled quality. Every haunted gaze and aghast shoulder shrug communicates the quiet agony of someone who has given up on life (he even visits the morgue to purloin clothes from the corpses). It’s a commanding turn. But do we want to spend 60 minutes by his side as he tramps through the gloom?

Poem of the week: Our Statues Go Unwatched by Katie Martin
Real news has value SUBSCRIBE