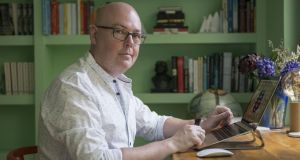 The great Russian writer Anton Chekhov had one piece of advice for aspiring authors: the centre of gravity of any story should always be two characters, he and she. To which Irish novelist John Boyne may well reply, that’s easy for you to say.

As Boyne makes clear during his candid interview on the Ryan Tubridy Show (RTÉ Radio 1, weekdays), bandying around gender pronouns as though it’s Tsarist Russia is a recipe for trouble. Tubridy talks to Boyne following the controversy surrounding his new young people’s book about a transgender girl, My Brother’s Name is Jessica, and an article he subsequently wrote for The Irish Times.

The author explains that his article concerns a friend who is a transgender woman, using male and female pronouns to describe this friend pre- and post-transition, and also alludes to Boyne’s objection to being called a “cis man”. (Prompted by Tubridy, he explains a cis person is someone who identifies with the gender assigned them at birth).

These points prompted Aoife Martin, director of Transgender Equality Network Ireland, to write an Irish Times article criticising Boyne’s use of differing gender pronouns, concluding “he is a cis man and he has cis privilege”.

'What this requires is the two of you to meet,' Tubridy says, implicitly dangling an invitation

As Boyne outlines this, it’s hard to disagree with his verdict that “this is an absolute minefield”. He admits his refusal to call himself a cis man may seem offensive, though he is happy for others to thus refer to him, but insists on his right to self-identify “as a man, not even a gay man”.

What really irks him, however, is the charge of “cis privilege”. Sounding wounded and pained, he recounts growing up gay when homosexuality was still illegal, being molested by priests at school, feeling ashamed of his sexuality, breaking up with his partner of 11 years and finally attempting to take his life. He ends each episode with a heartfelt refrain: “Was that my cis male privilege?” He also addresses Martin directly: “You don’t know me, don’t judge me.”

It’s a speech of such unvarnished honesty that Tubridy doesn’t dare interrupt. When Boyne stops, the host sounds empathetic, though he’s also aware that only one side of the story has been heard. “What this requires is the two of you to meet,” Tubridy says, implicitly dangling an invitation. The presenter then makes his own plea for “less shouting, more education”.

He deems himself part of “a generation who are in a sense transitioning, in terms of acceptance and understanding the way the world is going – and that includes language.” It’s a disarming admission of uncertainty that surely resonates with much of his audience.

Overall, the item shows off Tubridy at his best. For all of his periodic exasperation at “snowflake” sensitivities, in this instance he displays his instincts of inquisitiveness, fairness and openness. As for Boyne, he finishes with an appeal for artistic freedom: “I would stand by that, that you can write about anything you want.” That’s also pretty good advice for a budding author, though Boyne’s experience might make one think twice.

If nothing else, Tubridy should be in the good books of RTÉ director-general Dee Forbes. Appearing on The Hourglass (RTÉ Radio 1, Monday), a public discussion recorded on International Women’s Day, Forbes declares herself “a great believer in the diverse conversation”.

“The more different people you have in a room having a conversation, the better the conversation,” she tells presenter Taragh Loughrey-Grant, a comment that suggests she hasn’t heard some of Marian Finucane’s flatter panel discussions.

Predictably worthy as these comments are, they are the most interesting contribution from Forbes, who talks about the confidence instilled by her west Cork upbringing and by the mentors she encountered during her career in London. But her conversation has all the vibrant diversity of a corporate brochure, long on aspiration and catchphrase, short on revelation.

As Loughrey-Grant concedes, however, Forbes pushed for the programme’s diverse panel. Accordingly, Deborah Somorin tells of her turbulent upbringing in Nigeria, England and Naas, ending up as a teenage mother in care before finding her way out through determination and education to become an accountant. In comparison, Brendan Courtney’s trials as a gay working class pupil in school seem less harrowing, though it’s hard to accuse him of privilege, cis male or otherwise.

The tone of the discussion may be expositional rather than probing, but Somorin and Courtney’s stories help illuminate different aspects of contemporary Ireland. That they stand out from the standard RTÉ backstory implies that Forbes still has some work to do in airing new voices, however.

Different voices, be they new or familiar, have always been the lifeblood of Sunday Miscellany, RTÉ Radio 1’s long-running magazine for new writing, as is vividly illustrated on Miscellany 50: The Archives (RTÉ Radio 1, Tuesday-Thursday). Gathering together notable pieces from a half-century’s worth of material, it’s a fascinating anthology, not only for its mix of memoir and essay, but also a chronicle of how accent and enunciation has changed over the decades.

There is much to savour, be it Maeve Binchy’s account of St Patrick’s Day in Abu Dhabi, Sean McCarthy’s vignette of post-war London or Sam McAughtry’s memories of 1930s Belfast. (Full disclosure: my father Seamus Heaney also features, with memories of how my brother and I dressed in the 1970s).

The delivery of some contributors, such as Austin Clarke and Henry Heney, can now sound a tad mannered, but this only adds to the quietly mesmerising atmosphere of proceedings. In its scope of emotion and subject, recreating lives past and present, Miscellany 50 is a reminder that even in a world of changing terminology, the most important pronoun may still be the first person plural.  After all, we’re all in this together.

Radio Moment of the Week: No laughing matter

On Tuesday, author James Wallman appears on the Pat Kenny Show (Newstalk, weekdays) to promote his new book, Time and How to Spend It. Suggestions include travelling the world or joining a choir, but Kenny alights on one particular pastime of Wallman’s.

“Sign up for comedy improv, my goodness,” says Kenny. “I bet you’d be very good at this,” Wallman replies, as eager to curry favour as he is apparently oblivious of his host’s legendarily leaden sense of humour. Kenny, though, is as reliably knowledgeable as ever in his response: “I don’t think so.”