Shiels, best-known for role as Robbie Quinn, was founding member of Theatre Upstairs 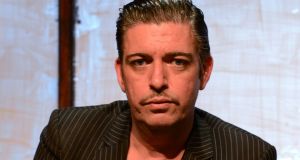 Tributes have been paid to “force of nature” actor Karl Shiels who has died aged 47.

Shiels, from Chapelizod in Dublin, was best-known for his role in Fair City in which he played Robbie Quinn, a shady wheeler-dealer character, for five years.

Shiels last appeared in the show on Sunday evening.

In a statement, Shiels’ agent Lisa Richards said it was “deeply shocked and saddened” to hear of the actor’s sudden death.

“Karl was a uniquely talented individual, simultaneously intense, light-hearted, funny, sharp-witted, outspoken and intensely powerful as an actor, director and artistic director of the Theatre Upstairs - where he was such a support and mentor for young writers, actors and directors - and of his own company, Semper Fi before that.”

The agency described the actor, director and mentor as a remarkable force in Irish theatre who was “hugely loved and respected by all who worked with him”.

“Our thoughts are with his partner Laura and his family, his children and their mother Dearbhla and his many close friends.”

Before moving into acting, Shiels was an electrician. He switched careers in the early 90s when he studied at the Gaiety School of Acting.

He won a Best Actor Award at the Dublin Theatre Festival for his role in Comedians in 1999.

He was nominated for a Best Actor Award at the Irish Times Theatre Awards in 2011 and for 2010 Stage Awards.

Shiels starred in numerous TV shows, including RTÉ’s The Clinic and Titanic: Blood and Steel, Peaky Blinders and The Tudors.

He was a regular actor at Dublin’s Abbey Theatre, appearing in At Swim-Two Birds, The Barbaric Comedies and Henry IV (Part One).

Shiels was the artistic director and a founding member of the Theatre Upstairs, which sits above Lanigan’s Bar on Eden Quay, Dublin.

He was awarded the Judge’s Special Prize at The Irish Times Theatre Awards in 2013 for his work with the theatre and for the promotion of new Irish stage talent.

‘Sorely missed by all of Irish theatre’

He was generous in helping new actors find their footing, industry members have said.

Speaking on RTÉ’s Ray D’Arcy show on Monday, Fair City executive producer, Brigie de Courcy said Shiels was “extraordinary. . . an absolute force of nature.” She spoke of the ease with which he assimilated the traits of his character Robbie Quinn and how quickly he established himself on the show.

“He came in and the audience just accepted him immediately,” she said, adding: “He just came in fully-formed and they embraced him completely.”

The experienced performer was “terrific” at giving advice to new talent, she said.

“For new people coming in he would have a quiet word,” she said, adding: “He would show them how to walk and talk.”

Bullfight on Third Avenue, a play directed by the 47-year-old, is currently running at the Bewley’s Cafe Theatre and is due to run until August 3rd.

The venue released a statement on Twitter, saying: “Everyone at Bewley’s Café Theatre is deeply saddened to hear of Karl Sheils’ passing. Karl has performed in many plays for us, as well as creating and directing shows regularly on our stage for more than a decade.”

Shiels directed the current production with “his usual sensitivity, flair and imagination,” the statement continues. “He will be sorely missed by all of Irish theatre and our thoughts are with his family.”

The Abbey Theatre said the organisation is “immensely saddened to hear of the passing of our colleague and friend, Karl Shiels.” Shiels made his acting debut with the Abbey in 1998 and directed his first play there in January. The Theatre said it will make a tribute to the actor and director at the end of tonight’s performance.

Fellow Fair City actor, Dave Kelly, wrote that he was “heartbroken” at the news. The actor, who plays Lee Collins in the soap, added:”I’ll miss you trying to make me laugh before a take. You brought great talent and life to the set every day. For all them little bits of wisdom you shared, thank you. Be good Robbie.”

Writer Paul Howard said: “Awful news about Karl Shiels. A great talent. Saw him in The Critic in Dublin a few years ago, stealing the show with his long black leather coat and his angry growl of a voice. And his unforgettable cameo in Intermission. A great supporter of Irish theatre. A terrible loss.”

Dublin-born actor Jason O’Mara, who stars in The Man in the High Castle, wrote: “So shocked and saddened to hear about the sudden death of Irish actor Karl Shiels - I can’t imagine what his family and friends must be going through. RIP.”

Writer, Gavin O’Connor, said: “Karl Shiels was a force of nature whose legacy will live on. A titan of our industry not only for his performances, but also the vital and unique platform he gave young writers, directors and actors with The Theatre Upstairs. A true one off. You’ll be very sadly missed.”