Paul Ryder: On My Culture Radar 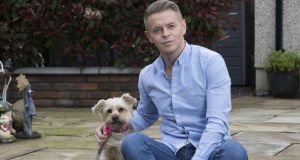 Paul Ryder: ‘I’m a light reader, I wouldn’t get too serious because we get enough seriousness in the news’

I’m currently reading Once, Twice, Three Times an Aisling by Emer McLysaght and Sarah Breen. It’s the third part of a story of a typical country girl who’s moved to Dublin and has to deal with friends, family and love troubles – and it’s all relatable. There are so many giggle-on-the-bus parts to it, I’m enjoying it. I’m a light reader, I wouldn’t get too serious because we get enough seriousness in the news.

I’m a creature of habit so for parties and group dinners, I always end up in Brasserie 66 on South Great George’s Street. It’s slap bang in the centre of Dublin, and it feels more homely than a prim and proper restaurant. It’s cool, chilled and laid back. The staff there are so good and accommodating, and that’s what I look for more than things like decor.

Deirdre O’Kane is one of the funniest women in the world. She was probably the first comedian that came into my sights as a kid. I had all her VHS tapes, and even at an age where I shouldn’t have got the jokes, I got the jokes and loved them. Over the years she’s done great stuff and she’s able to shift between drama and comedy. I saw her last live stand-up show, which was fantastic. She’s so dry. In Ireland, we’re not afraid to take the mick out of ourselves, and she’s the best at it – she doesn’t take herself too seriously. They say don’t meet your heroes but I’ve met her, and it was everything I had hoped for and more. She was kind, warm, and hilarious.

I haven’t seen it yet but I’m going to see Six the musical. It’s coming to Dublin to the Bord Gáis Energy Theatre in May, but I’d booked to see it in the West End in January before I found that out. I keep watching clips online and I need to stop, otherwise I’m going to ruin it for myself. The show is based on the six wives of Henry VIII. It all happens in this one set-piece, like a mini rock concert. It’s only 90 minutes, but the reviews have been fantastic. It’s similar to Hamilton in that it’s contemporary – like they reference Beyoncé, but it’s just a little nod and then they go back to the story.

Doireann Garrihy has a podcast called The Laughs Of Your Life. It’s where she interviews well-known celebrities – like Ryan Tubridy, Síle Seoige and Deirdre O’Kane – about their life in laughter. She’d ask when they were laughed at, and when they had the last laugh. It’s insightful to hear such high figures talk about the good, the bad and the indifferent in their life. It’s not just all sunshine and positivity – for example they talk about moments where if you didn’t laugh, you’d cry. There’s a good spectrum.

My Bose Colour Soundlink comes everywhere with me. Because music is a big part of my life, I have it in the bag just in case, and nine times out of 10, I use it. Even in the car, if my stereo doesn’t go loud enough, I put it on, roll down the windows and blast out music. The battery is unreal. It’s the second one I’ve bought in four years because I wear it out so much, but a full charge gives me a couple of days of playing music as much as I want.

I’m obsessed with memes from RuPaul’s Drag Race. There are lots of accounts that use them to take the piss out of daily life, but I love @rpdrmoments on Instagram as it’s particularly relatable.

Paul Ryder is the artistic director of Cinderella at the Pantodome in the Royal Hospital Kilmainham, Dublin until 5th January 2020.