The Write to Right

In this supplement you’ll find a wonderfully refreshing and varied collection of short stories, poems, and scripts written by children from all over Ireland 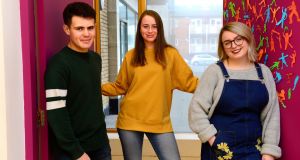 The adults among us should read young writers far more often. We should put down the heavy novels and sports biographies every now and again to pick up a short story from someone so fresh to writing that it may even be their first attempt.

Jumping into a story by, say, a pre-teen, is a bit like having your head dunked in a bucket of rainbows. Or maybe like being chased by an axe-wielding T-Rex. Or strapped to the nose cone of a rocket ship made of bananas. Or, if you’re lucky, it will be all of these things in the first paragraph.

Young writers have a tremendous understanding of story and structure – the beginning, middle and end of a tale – but they add a distinct view of the world and an unselfconscious imagination. The younger they are, the less cynicism has crept into their minds and leaked from the pens. But even as they travel through their teenage years, when their stories might tighten up and the mood darken, there remains a rawness to their vision, an optimism and clear sense of right and wrong that makes their writing special.

Before such young writers walk into Fighting Words to craft their stories, and before they push through the magic bookcase at its entrance, they pass under a four-word promise that say so many things.

“The Write to Right,” it says over the door.

That idea stretches far beyond the literal act of writing down a story. It is about their right to create; to express themselves; to describe the world and their world. It is about the right to time-travel, escape and explore. It is the right to roam the boundless limits of their imagination or to dig deep into the problems on their doorstep or in their home.

It is, ultimately, declaring a right not just to be free, but a freedom to be children.

It is fitting, then, that on the 25th anniversary of the signing of the UN Convention on the Rights of the Child, the Ombudsman for Children Dr Niall Muldoon asked teenage writers to craft their response to the Convention’s articles. What better viewpoint to have than that of the young people the Convention is meant to protect?

In this supplement you’ll find 25 pieces, with each writer spinning off from a particular article. The directions they went in were entirely up to them. The writers come from all over Ireland, and a variety of backgrounds and experiences, and that tells. The result is a wonderfully refreshing and varied collection of short stories, poems, and scripts.

There is Bikem Pastine’s beautiful and poignant story based on the right of parents and children to be together; Colm Nicholl’s sparky two-character dialogue based on the right to help if you have been badly treated. Michael O’Donnell’s poem on “forms of exploitation” contains wonderful turns of phrase (“like a shadow wrapped in a shroud”), while Robyn Gill’s response to the Convention’s simple idea that “all children have rights, no matter who they are” is an efficient yet heartbreaking story.

Throughout the supplement you will find comedy and sadness; fear and optimism; twists and turns. Each writer brings their unique voice to the conversation but what each piece has in common is a vital freedom of spirit.

However, not only are these pieces worth reading – they are also worth listening to.

When you tour schools, libraries and festivals as a children’s writer, you get asked a lot of questions. Young readers love asking questions. You will never ever end an event with every raised hand satisfied. They want to know things and will never feel they’ve learned enough.

There is, however, only one question only adults ask: How does a writer put yourself in the mind of a young protagonist?

Children never ask this question. They never stop to ask if there’s a point in your life when you completely forget what it was like to be young; when you cut a rope and drift into the glowering seas of adulthood to not look back. They maybe see themselves as on a continuous journey from where they are now, rather than entirely different human beings altogether for whom their childhood selves are alien.

Well, here are teenage writers writing of other teenagers, but also stepping forward into the minds of characters much older than them. In doing so, they are not just writing stories but also sending a profound message from their generation to the rest of us. Their words don’t just remind us of all the things the older – but not necessarily wiser heads – have lost, but of a hope and clarity about how the world should be. A vision we must kick harder not to let go of.