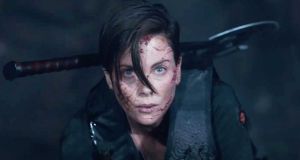 Charlize Theron in The Old Guard

THE OLD GUARD ★★★☆☆
Directed by Gina Prince-Bythewood. Starring Charlize Theron, KiKi Layne, Matthias Schoenaerts, Marwan Kenzari, Luca Marinelli, Chiwetel Ejiofor. Netflix, 124 min
“I’m Andromache the Scythian, but you can call me Andy.” If you didn’t know where you were with the latest Charlize Theron kick-’em-up then that line should clarify things. She and her colleagues form a band of prehistoric immortals who go up against a sinister cartel seeking to exploit their gifts for financial gain. The film is, if anything, not quite silly enough (an achievement, considering what you’ve just read). But Theron makes it work. She’s fast becoming the action star of the age. DC

Rejoice! Ben Affleck has returned to gaff-prone celebrity and, oh yes, acting. Reuniting with O’Connor (The Accountant), this muscular drama pivots around his performance an alcoholic Irish-American construction worker who ends up coaching high-school basketball team. Redemption looms. It’s a fine character study, but one that fails to leave enough room to develop meaty material for either the coach’s basketball charges or family members. Gavankar, playing the “Concerned Ex-Wife”, and Brandon Wilson as “Promising Player” do well enough. TB

Scooby-Doo has enjoyed many reincarnations over the years. He has shared the screen with Vincent Price and been saddled with his appalling nephew Scrappy. But he’s never been such an ugly mutt as here. Wahlberg has fun voicing a cowardly superhero assisted by a capable black Teen Angel (Clemons) and a sarcastic robot dog (Jeong). But it’s a subplot too many for an ugly film already groaning with cartoon cameos, a rampaging Cerberus, an Indiana Jonesy search for artefacts, and Simon Cowell. TB

Australian cavers grapple with an enormous crocodile. Alas, the first new release to arrive in cinemas following lockdown is an underwhelming affair. The filmmakers have none of the skills required to maintain tension when you’re keeping your monster hidden. The film is mostly composed of actors breathing heavily in studio tanks while torches bounce off dampened sets. The characters are dull, the tension poorly maintained and the outbreaks of violence deeply confusing. The dumb, above-ground ending is fun in a sub-Corman fashion. DC