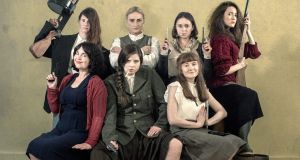 Locked and loaded: The Roaring Banshees

Seven women take refuge in a church following a mission gone wrong. It is the early days of the Irish Republic and all seven are members of Cumann na mBan and veterans of the Rising. Not present is Countess Markievicz, the president of the militant organisation, who famously advised, “If you want to walk round Ireland, or any other country, dress suitably in short skirts and strong boots, leave your jewels and gold wands in the bank, and buy a revolver.” Peter McGann and John Morton’s play goes one further, imagining their seven renegades armed to the teeth, retreating from a failed assassination attempt against Eamon de Valera, and spurred to flee to Prohibition-era America, where they earn a crust making poitín for the Chicago Mob. That, understandably, is a cocktail liable to explode.

If there’s a Tarantino-level ring of counter-factual history going on here – unchained and inglourious – not to mention a title that feels a sliver too close to a Martin McDonagh also-ran, that all fits with the ethos behind Kilkenny company Devious’s Ripping Yarn trilogy (this is the second instalment), in which the hotter the story, the better. Directed by Sarah Baxter and featuring seven fine performers, it is not necessarily intended as a subtle meditation on feminism and Fenianism. It’s something considerably more locked and loaded, a piece for when hype and history rhyme.

John Boorman: ‘I have to take a measure of blame for Harvey Weinstein’