View from the UK: What does it mean to be a national theatre? 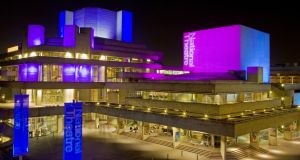 The Royal National Theatre in London: “A national theatre isn’t just an organisation that puts on plays. It is also a symbol.” Photograph: Scott E Barbour/Getty

They had Richard Eyre on the radio last week. BBC Radio 4’s PM programme brought in the former artistic director of the National Theatre in London to talk about the Duchess of Sussex being appointed royal patron. It was a brief news item inspired by Meghan Markle, but it exposed the kind of paradoxes at the heart of every national theatre – paradoxes that continue to create flash points at the national theatres of Scotland, Wales and Ireland.

First, presenter Evan Davis wondered if the NT was a “bit shy” about its royal connection. Eyre admitted he hadn’t been too keen on the organisation rebranding itself as the Royal National Theatre when he took over in 1988. He thought there was a “virtue in the demotic National Theatre”. But he had accepted the board’s argument that the royal appellation gave the company valuable recognition from a sometimes resistant establishment. He seemed equally happy when the “Royal” was quietly dropped by his successors.

Nor did he disagree with the presenter’s suggestion that a theatre should have a “slightly subversive air”, although he did point out it is only recently that theatres have been “explicitly critical of the establishment”. Shakespeare, for one, depended on royal patronage and knew the risks involved in trying, like Hamlet, to catch the conscience of a king. Eyre recalled that, at the very point the “Royal” was being added, the National Theatre had premiered Alan Bennett’s A Question of Attribution with Prunella Scales doing a turn as the Queen. By the sound of it, a few monarchist feathers were ruffled on the board.

In London, it is possible to stage a state-of-the-nation play while remaining vague about the nation you mean. Not so elsewhere

All this is because a national theatre isn’t just an organisation that puts on plays. It is also a symbol. Put the word “national” in your name and you become a receptacle for a country’s values. In what you do, the nation will seek to see the very definition of itself; a definition perhaps vaguely articulated, but intensely felt. Change your priorities, by being too regal or not regal enough, and you upset the nation’s sense of its own identity.

The matter of royal patronage is typically vexatious but there’s little controversy here. Before the schisms of Brexit, any discussion about Englishness seemed to begin and end with Billy Bragg. Few seemed concerned with what the word “national” meant in the context of the National Theatre – even about which of the nations it supposedly represented. In London, it is possible to stage a state-of-the-nation play while remaining vague about the nation you mean. Not so elsewhere.

When the National Theatre of Scotland was established in 2006, for example, none of the old cultural certainties applied. In the self-aware 21st century, it wasn’t possible to make assumptions about universal truths, great plays and grand buildings as the Victorians had done when they conceived the first national theatres. Not only was the definition of Scotland up for grabs (Highland, lowland, urban, rural, Scots, Gaelic, none of the above …), but the nature of theatre itself. Now, even the three-auditorium flexibility of London’s National Theatre seemed limiting. That’s why artistic director Vicky Featherstone began her inaugural season not with a well-made play in an ornate lyric theatre, but with Home, 10 site-specific performances in private flats, housing estates and island ferries. It was a provocation about what a national theatre could be, who it could be for and where it could take place.

Being a national theatre, the new company naturally sparked criticism and debate. Most unhappy were the lobby who demanded a showcase for Scotland’s earliest classic, Sir David Lyndsay’s 16th-century A Satire of the Three Estates. They reasoned that a theatre dedicated to the nation’s excellence had a duty to perform the nation’s most excellent play. Others felt the nation had more recent achievements to celebrate. But, largely, Featherstone’s “theatre without walls” policy sidestepped the pitfalls. This was a theatre that could be all things to all people.

It is a building that lays claim to the nation’s identity, something that will always be fluid, contentious and up for a challenge

Sensitivities run close to the surface, however, and it means that when a row broke out last week about the employment practices of the Abbey, Ireland’s national theatre, it seemed to be about more than casting decisions and freelance opportunities. Ostensibly, what is at stake is the declining number of Irish-based actors who have been directly employed by the Abbey.

More than 300 actors, designers and directors signed an open letter complaining that the theatre had reduced the number of Ireland-based actors it had employed by 54% and caused “devastation” in the freelance theatre community. They claimed there will not have been an Ireland-based actor in an Abbey Theatre production on an Abbey stage from 8 September 2018 until 23 February 2019. (The wording is crucial: there have been Irish actors on the stage in that time, such as the dozen who starred in the critically acclaimed Asking for It, but that was a co-production “in association” with the Abbey.)

The theatre has responded sympathetically to the letter, but, ironically, the changes have come about partly as a result of the desire of the Abbey’s joint directors, Graham McLaren and Neil Murray, to better reflect the nation in all its variety. By cutting down the number of large in-house productions, they intended not to repeat the losses of €1.4 million, incurred over a two-year period, but also to increase the number of coproductions and open the doors to smaller companies.

Where the management sees diversity and opportunities for “artists who had not previously gained access to their national theatre”, the freelance signatories, who include Ciarán Hinds and Sinéad Cusack, see “devastation amongst our ranks”, arguing that a strategy that was “admirable in theory” was causing “less diversity and reduced employment, not more”.

Such arguments are impassioned not only because of the immediate financial impact but also because of the status of the Abbey. If the national theatre can do this, the complainants seemed to say, what hope do we have for every other theatre in the land? It’s the same reason a correspondent to the Irish Times wondered if there was a jinx on the Abbey. “Open any book that has been penned on the subject since its foundation in 1904,” wrote Ursula Hough-Gormley, “and you will read of trauma, controversy and sometimes as much violence and drama in the auditorium as any play it ever presented on stage.” She was right about the theatre’s volatile history, but wrong about the jinx. Rather, it is a building that lays claim to the nation’s identity, something that will always be fluid, contentious and up for a challenge. We fight over our national theatres the same way we fight over our country.

You don’t have to look far into the Abbey’s history to see how true this is. In 2015, the theatre found itself at the centre of the campaign #WakingtheFeministsafter it had announced a virtually all-male lineup for its centenary year in 2016. Bad enough to commission one female playwright out of 10; doubly bad for a national theatre to be setting such an example.

More recently, 40 theatremakers in Wales felt aggrieved enough to put their name to a letter that accused National Theatre Wales (NTW) of seeming to “take pride in ridding itself of a theatrical identity and even its nationality”. Writing last September, they were concerned not just about their jobs at a time when the company appeared to be producing few shows, but “about the very purpose of the organisation”, which launched in 2009 as the country’s English-language national theatre. At the heart of their complaint was a question of nationhood and identity, exemplified by a play called English that was staged by a Manchester company, Quarantine, and that told “a history of the English language in Wales” that, they felt, did not take into account the “history of its relationship with the Welsh language”.

For its part, the NTW is at pains to say the four new productions in its 2019 season are “all made with leading Welsh and Wales-based artists and companies”. That will assuage the critics as long as the commitment runs deep. “This isn’t about parochialism but to prevent the marginalisation of the Welsh experience,” wrote playwright Lisa Parry in the Guardian. Like many, she expected a national theatre not simply to be artistically excellent, but to be an expression and embodiment of a national debate. – Guardian

This article was amended on January 15th, 2019. The original version stated that there was an accumulated deficit of €1.4 million at the Abbey when the current directors took over, in 2017. This figure was given by the Abbey in a statement that was later retracted. It actually had a reserve of roughly €500,000