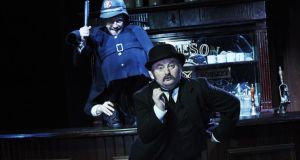 Tucked up in bed with an unsatisfying book, Molly Bloom has trouble with one significant word: Metempsychosis. It means the transmigration of souls, her husband, Leopold, explains: reincarnation. By now, from Homer’s Oddysey to Joyce’s masterpiece and countless versions since, they really ought to be used to it.

It says something that Molly, the unfaithful sensualist, prefers to read smut, while Bloom, who is hardly a saint, affects more cerebral interests. Ulysses has always appealed to the contours of the mind and more fleshly impulses: Joyce admitted to “so many enigmas and puzzles that it will keep the professors busy for centuries”, but access to this depiction of dear, dirty Dublin ought to be for all.

Dermot Bolger’s 1994 adaptation, A Dublin Bloom, parsed Joyce’s sprawling, shape-shifting narrative into something readily digestible, like a theatrical Cliffs Notes edition. Since redrafted, under the new title, Bolger’s version holds a particular appeal for the demotic style of director and designer Graham McLaren. Wrapping the audience around a chequered cabaret stage, stretching from a piano to a bar, and populating it with a multi role-playing ensemble and gaunt puppets, the production shucks Joyce’s content clean from its original form, spinning this incarnation through a series of theatrical games for a bawdy, energetic knees up.

No one could feel left out, and Bolger faithfully includes every section, but the achievement of Ulysses is inevitably vastly reduced. Take Molly’s famous stream of consciousness, here carefully punctuated and parachuted through the play, delivered in Janet Moran’s personable direct address. The bold experiment of the novel hits the stage as a conventional device.

Likewise, the emotional pallet is oversimplified: as Stephen Dedalus, Donal Gallery leaves a faint impression, haunted by the drifting puppet of his mother, while Rudy, the son the Blooms almost had, materialises like an emaciated Gollum over mawkish music.

The show is more at home with the nudge-nudge of body humour, wringing toilet jokes for everything they’re worth, stressing lusty physical performance, making judicious use of a slide whistle. You get plenty of sugar and less of substance.

That means that the most uncomfortable scenes of the book, such as Bloom’s ugly encounter with the Citizen’s national chauvinism, his own lecherous ogling of the young Gertie, or the surreal bends of Nighttown are played mostly for broad laughs, lightened with puppetry and cartoonish gestures, always giving David Pearse’s spinning-top Bloom the upper hand. Its pleasures are in the performance, particularly from Garret Lombard’s strutting, priapic Boylan and the whirling physicality of Raymond Keane, Bryan Burroughs and Caitríona Ennis across several roles. But you can’t escape the feeling that Ulysses’ metempsychosis here has given a literary masterpiece the depth of a pop-up book.