“Comfort is the poison” reads the on-screen message, as Rock wrongfoots his audience at every turn during an incendiary show 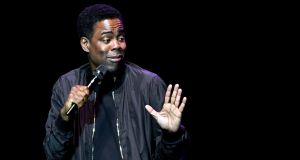 “Let me know when I tell a lie,” Chris Rock says at one point, to dead silence. Photograph: Ethan Miller/Getty Images

It has been nine years since Chris Rock embarked on a major world tour, and in that time he has gone through a divorce, and Trump’s rise to power, two of the many subjects he weaves into a rich tapestry tonight. Mobile phones are strictly banned, and are put into pouches that can only be unlocked outside the venue, forcing the audience to collectively pay attention to Rock’s deft stand-up.

“Comfort is the poison” reads the screen as he arrives on stage, to the strains of Jay-Z, and as the message promises, he proceeds to discomfit and wrong-foot the audience at every turn.

He praises bullies, saying that “pressure makes diamonds”, who are the “nerds” that will ultimately “save the world”. He mentions the stress of raising black children in a white world by saying he prepares them for the inequality and injustice ahead by making everything white in the house “hot, heavy or sharp”. And he links George Bush’s tenure as president to Barack Obama’s future success. It’s incisive and incendiary.

Rock often uses vulgar images and crude humour as a Trojan horse for insightful observations about the way we live, not only with each other, but as citizens in the world, and through doing so, he reveals much about himself.

His dissatisfying experiences in the dating world, for example, are a consequence of his divorce, something he takes full responsibility for, referencing affairs, and a reliance on pornography that morphed into “sexual autism”. These honest reflections land, because they are both painful and painfully funny.

His “crazy year” of custody battles, with people looking for “receipts of love”, trying to take his “New Jack City money”, becomes an exploration of the justice system, and his anxiety of being a “man in family court, a black man in any court”. His semi-desire to “find God, before God finds me”, leads to a decimation of religious extremism, asserting that God probably doesn’t need anyone’s help, and if “he” did, wouldn’t it be someone like Malcolm Gladwell?

Rock’s riffing on Limerick is a surprise, equating his experience with that “scary ass drive” in the Canary Islands from the airport to the resort, where “little kids are eating dreadlocks” and “Shabba Ranks is stabbing a dog”, offensiveness in the service of a greater point about the tension between privilege and poverty. “Let me know when I tell a lie,” he says, to dead silence.

As he drops the mic, and leaves the stage to images of Richard Pryor, Joan Rivers, Rodney Dangerfield and George Carlin, some of the comedy greats, the general feeling is that Rock is one of them.