Hamnet is a child frozen in time to devastating effect 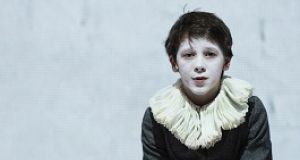 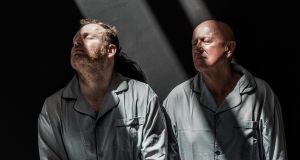 David Ganly and Niall Buggy in On Blueberry Hill

Who haunted Shakespeare when he wrote Hamlet? A play so steeped in death, full of demanding fathers, hapless sons and restless ghosts, it was completed just three years after the death of his young son, Hamnet. If the name of the Dane was intended as a memorial, it backfired: Shakespeare’s overwhelming legacy and pitted biography have reduced poor Hamnet to the status of a typo.

“You haven’t heard of me,” apologises the 11-year-old boy who arrives onstage alone with a hoodie and a backpack – although, like any contemporary kid, he knows he shouldn’t talk to strangers.

That we are the strangers is made obvious. The expanse of the backdrop to Andrew Clancy’s design holds, as ‘twere, a mirror up to the stage, a live projection from the rear wall that affords us two images: the boy before us and his video apparition.

It makes an uncanny, mesmerising impression: introducing himself hesitantly, Ollie West’s Hamnet soon begins rehearsing Shakespeare’s famous speech, in heartrending anticipation of ever meeting and impressing his father. But Dead Centre’s riveting new work, co-produced by the Abbey, already projects its own poetic meditation on being and not being.

When Hamnet’s father does appear, a ghost in the machine of José Miguel Jiménez’s remarkably supple video work, the experience becomes a deft combination of technology and live performance, presence and absence, in which Shakespeare becomes haunted by Beckett.

“There’s a problem when you try to understand big things by looking at small things,” Bush Moukarzel’s solemn Shakespeare will tell his son. “You get lost.” That, however, is the beautiful conceit of the play, and, to some extent, the entire modus operandi of co-directors and writers Moukarzel and Ben Kidd. (Chekhov’s First Play traced the Russian dramatist’s whole worldview to shaky beginnings; Lippy mused on a meaninglessness universe from a single unexplained incident.)

Here the small thing is a small person, an unassuming boy, who, in Ollie West’s extraordinary performance, is both preternaturally mature and a loveable goofball: playfully interacting with the audience, asking Google for explanations, singing Johnny Cash (“It’s hard when you sound like an angel”). But he stands for a multitude of big things: the rush to grow up, the ambition to be a great man, the coarsening of modern culture, all our proud inheritances and irretrievable losses.

Over the course of a beautifully spry hour you can admire the performance’s bright surface or plunge into it fathoms deep – behind sly allusions to Tom Stoppard or the Wooster Group (other contemporary tragedians who made Hamlet their heirloom), striking considerations of mortality and meaning, or, most gentle and affecting, the halting and flowing relationship between an abandoned son and his remorseful father.

We are often expected to see ourselves in Shakespeare, to find our small struggles in his canonical dramas. But the sly and disarming entreaty here is to see ourselves in Hamnet, and his overlooked significance, a child frozen in time, finally seen and heard. - Peter Crawley
Runs until October 7

It’s no accident that Sebastian Barry’s new play opens, like St John’s Gospel, with the words “Ann so tosach do bhí an briathar”: “In the beginning was the word.” Few people can spin a world out of words in quite the way that Barry does, and On Blueberry Hill weaves a story-carpet that takes the audience out of its claustrophobic prison-cell setting, into the streets of Dún Laoghaire and away to the seas around Inish Mór.

Sabine Dargent’s set for this Fishamble production is stark and effective. A set of bunk beds dominate the stage. On the lower bunk we find PJ, a former seminarian given to poetic utterances: “Sleep came upon me like a lorryload of darkness tipped over my head.” On the top bunk is Christy, who prefers to riff with the “f” word. They’ve shared a cell for 20 years. “Like turtle doves,” Christy explains. “In prison, I mean, for f**k’s sake, the chances of that . . . ”

What are the chances? There is a very large slice of improbability at the centre of On Blueberry Hill – but then, as we all know from listening to Serial and other “true crime” podcasts, nothing is more implausible than murder. And as PJ and Christy tell their stories in turn – one spotlit, the other hidden in Mark Gallone’s pitiless, intricate dance of darkness and light, of which St John would surely approve – they map the transformation invoked, though not fleshed out, by the Biblical phrase “a change of heart”.

The less the audience knows about the details of this in advance, the better. What ought to be shouted from the rooftops, however, is the achievement of the two actors, Niall Buggy and David Ganly, as Christy and PJ. It’s hard to find a word that captures it adequately. “Superb” will have to do. - Arminta Wallace
Runs until October 8th