The Sin Eaters: Memories from Irish women in our vexed recent history

Anú’s latest show, which takes place in a clinical space, is impressive but not intimate 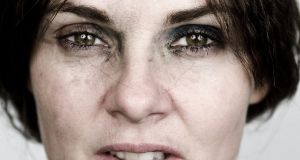 “Do you think places hold memories?” asks a young woman, with grim determination, early in The Sin Eaters.

It has always been Anu’s belief that they do, making them a very good starting point for the daring site-specific company. Bringing audiences into several locations heaving with history, from former red light districts to Magdalene laundries, Anu’s signature is to let the unresolved past echo again clearly through the present.

Their latest production changes tack, starting with memories, national and traumatic, and gathering them together in an otherwise clinical place for examination. The interlocking rooms and large glass windows of this scientific laboratory resemble a ghostly panopticon. In Owen Boss’s haunting design, aided by the gradual shifts in Paul Keoghan’s lights, you can sometimes see all the way through it, and sometimes you can only perceive figures as wavering shadows, struggling to become visible.

These, it will be come apparent, are Irish women from our vexed recent history, here designated “sin eaters” after those who ritually consumed the sins of others. That metaphor is explained, by a wry Rachel O’Byrne, as the woman’s role in the Constitution, under Article 41.2.1, the anachronism that enshrines her place in the home, “for the common good”. To this metaphor is added another: a sort of otherworldly inquiry into traumatic histories in which body autonomy is denied. “We know these stories,” says Niamh McCann, “we know them at a deep level.”

It’s rare for director Louise Lowe to allow a performance to become conceptually overstretched – the location’s capacity for soil testing is also put to metaphorical use – or to include so much effortful explanation, as though Anu’s methods and its subject haven’t found comfortable alignment in the exploration of an uncontainable issue.

Whether you know these stories, and how deeply, will depend on personal proximity. When Byrne glides by with the words, “He said that if he told me what he did to me that night, that I would never sleep again,” with no other context to suggest their origin, only those familiar with Allison Gough’s testimony about the disgraced obstetrician Michael Neary will realise the specific horror. Otherwise it lends to a sense of female oppression, kept artificially vague. “We are all in a state of sleeth,” someone says, more than once. A state of what?

Informed either by the clinical space or these lingering injustices, the production preserves distance rather than shrinks it. I viewed an evocation of Joanne Hayes, the girl at the centre of the Kerry babies case, from behind a two-way mirror, the position of her interrogator, while Neili Conroy explained the improbable theory of heteropaternal superfecundation.

Like Úna Kavanagh’s performance, delivering the imagined monologue of a brain-dead woman kept on life support, while the High Court fumbles through interpretations of the eighth amendment, or Emma O’Kane’s more abstract physical torments, the performances are technically impressive rather than intimate or elucidating. That makes a late gesture, asking us to take on the role of sin eater, simply confusing. The mistiness of the broad inquiry has made it’s significance no clearer.
Runs until October 15th