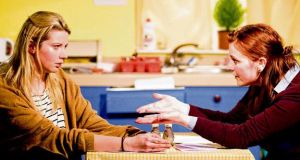 What would possess someone, in the immediate aftermath of grief, to burn her brother’s suicide note? The set-up for Roisin Coyle’s short play isn’t that sensational: the contents of the note, are already known to the fire-starter, her harassing sister and their offstage mother, a devout Catholic who keeps reading the note religiously. At first the act is a sort of exorcism, but in truth it’s closer to burning a draft of an unsatisfying fiction. The note is fake.

Staged by debut director Janet Moran, there’s somehow less to Noteworthy than meets the eye, but that’s because it is delivered as a very intact piece of realism – staged in real time on a complete kitchen set – when Coyle seems more intent on creating a more discreet and fascinating allegory. To some extent it’s about the difficulty of creative writing itself, which explains why the dead brother remains onstage, reading words his sisters put in his mouth. More subversively, it’s a meditation on what happens when religion and grand narratives lose their authority.

Our sensitivities around suicide make might make it hard to read as a straight metaphor, but this dark comedy has a bolder subject still: in a bereft and disbelieving time, we have to come up with our own answers.

Can't see that? Catch this