Theatre of nature: Examining the environment through the lens 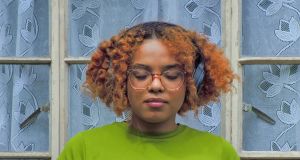 1000 Miniature Meadows by Luke Casserly & Shanna May Breen is a co-commission from Dublin Fringe Festival and Science Gallery Dublin.

During lockdown, many people around Ireland reacquainted themselves with the great outdoors. They found solace in parks, fields and forests. They paid closer attention to birds, flowers and bees. Sounds, smells and sights that once seemed ordinary suddenly became novel and exciting.

Among those who acquired a renewed appreciation for nature were theatre artists Luke Casserly and Shanna May Breen.

“I was back in Longford for a long period of time when everything shut down initially,” says Casserly. “For the first time, everything was so intense. A bird would fly and you’d be like, ‘Woah!’”

Breen agrees. “I was in the city and cycling down to Herbert Park, ” she says. “You’d see a swan and it was like this otherworldly thing.”

That notion of re-engaging with nature has helped inspire their new piece, 1000 Miniature Meadows, which will take place as part of this year’s Dublin Fringe Festival.

It’s an interactive sound project that explores Ireland’s biodiversity crisis through playful soundscapes and interviews with experts such as Dr John McCullen and Éanna Ní Lamhna. The venue? In nature, near home.

Ticket holders are sent a letter containing a welcome message, instructions and Irish native wildflower seeds. They are then sent a link to the project and invited to go outside and listen to it at any time during the festival. Afterwards, there is a nationwide planting project, which will see people plant their wildflower seeds.

In doing so, they will create a “network of a thousand miniature meadows” around Ireland.

“It’s kind of special to think that a year from now, wherever you plant that meadow, you will be able to revisit it,” says Breen.

“Legacy is a big thing for us,” adds Casserly.

The pair first started working together after they met two years ago at Next Stage, the artist development strand of Dublin Theatre Festival.

“We had a lot of workshops together and I thought he’s doing deadly stuff and we were interested in each other’s responses to different things that were happening,” says Breen. “We said, ‘Let’s make something together.’”

From there, they collaborated on Mould Into Shape, which debuted at last year’s Dublin Fringe Festival and explored our relationship with plastic.

“We are both very curious about the environment,” says Breen. “We are by no means scientists or experts so art is the world where you can make your world intelligible. We’re like, ‘What’s all this crazy stuff about plastic or biodiversity or trees?’ and then through that we’re kind of figuring it out.”

This latest project came about after they were approached by Ruth McGowan, director of Dublin Fringe Festival, and asked what they would do if the festival was able to proceed in a limited form. They immediately started brainstorming on Zoom and were excited by the possibilities.

“Myself and Luke were very interested in connecting with an audience that was nationwide and bringing it out of our cities because we had a chance to do that this time,” says Breen.

What started as a small-scale project quickly ballooned into something greater. Over the past month, the pair have teamed up with sound designer Brendan Farrell to interview experts on biodiversity and gather field recordings before weaving it together into a 40-minute aural tapestry.

They acknowledge that there is little cause for celebration when it comes to Ireland’s biodiversity.

“We have the lowest tree cover in Ireland of anywhere in the European Union, which impacts our biodiversity greatly,” says Breen. “So many insects are going into decline. Our bees, which pollinate a third of our food sources, are going on the red list. There’s something very sad happening all around us all the time.”

Nonetheless, they maintain that 1000 Miniature Meadows is far from grim.

“The interviews themselves have a lot of very uplifting things within them and a lot of very interesting viewpoints on the environment, which people may not have heard before,” says Casserly. ”We’re not trying to sugarcoat it or anything but it’s certainly not all doom and gloom.”

Indeed, Breen describes it as “a wee little gift”.

“We want it to be a positive thing,” she says. “Having lots of different people speak, it’s not necessarily angled towards what the listener should think about the environment in Ireland at the moment because you’re listening to what so many people think.

“You have the optimism of John McCullen talking about trees and tree roots and inviting the listener to go underground and imagine the network underneath. You have someone like Éanna Ní Lamhna, who is a tonic, talking about how the Government can do better. There are different lenses on the subject… We want people to feel better through the experience.

“We’re devastated because we’re hearing all this information but the interviewees are reassuring us, ‘No, it’s okay because now we’re talking about it. Twenty years ago I was banging on about the same stuff and nobody was listening.’ Now those conversations are being had through different means.”

To date, much of Casserly and Breen’s work has focused on issues concerning the environment. As a result, they say they have become far more conscious of green issues.

“Through this work, it’s a commitment to becoming better at being more sustainable,” says Casserly. “My dream is to have an eco farm in about five years and live completely plastic-free. That’s what I feel like I’m working towards.”

Breen adds that she feels similarly. “I want to have a lower waste life.”

Proceeds from 1000 Miniature Meadows will go towards the planting of 1,000 indigenous Irish trees next year. Further details of that particular project are embargoed but they say they intend to continue producing work that explores the environment.

“We’re onwards and upwards in terms of examining the environment through the arts lens,” says Breen. “We’re very gung ho on that now. I think it would be weird to make a show about anything else.”