The movement of people: dancing about migration

How can a dance festival engage with the refugee crisis? Powerfully, it seems

We join dancer/choreographer Liadain Herriott as she prepares for her show ‘Liminal’ this week in Dublin Dance Festival. Founded in 2002 DDF features the best of contemporary dance and runs until May 28th. Video: Bryan O'Brien 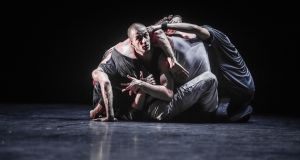 “If we unify then we are louder. The collective body really inspires me,” says Patricia Apergi, the Greek choreographer of Planites 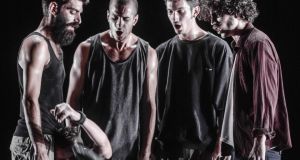 “If we unify then we are louder. The collective body really inspires me,” says Patricia Apergi, the Greek choreographer of Planites

In 2013, Greek choreographer Patricia Apergi made a dance about migration. Two and a half years later, the choice is prescient as Greece has become the focus of Europe’s migration issue. Planites, a quartet for four men, is the opening work in this year’s Dublin Dance Festival.

“I remember when I first saw the televised footage of thousands of refugees walking along Greek roads,” she says. “I started to cry, because here was an image that I had only imagined when making Planites. Now here was the reality of people lost, struggling and carrying their belongings in a strange place. It was very sad, because a lot of issues we brought up in Planites are facing us right now.”

The highly political Apergi sees no separation between her art and life. The issues that concern her as a person also concern her as an artist, so when making Planites, she and her collaborators would take part in protests during the day and then physicalise the language of protest in the dance studio at night.

Power of the protest

“Protest is the only weapon left for people to be heard,” she says. “I totally believe in the strength and power of the protest. If we unify then we are louder. The collective body really inspires me.”

For her, dance is the ideal medium to interrogate the issues around migration, not in any abstract way but because movement is universal. “Everybody moves and everybody walks, so it is easier to empathise with the physical sensation of migration.”

Guy Cools, author of In- between Dance Cultures, says that “in her autobiography, Martha Graham constantly refers to the fact that the body doesn’t lie. Rather, the body is the memory bank of everything we have lived, felt or thought.”

Cools was a participant in Who Am I?, a gathering on dance and migration at DanceHouse in Dublin in December. Its main focus was on how an artist can construct an identity in an environment where mobility – through foreign residencies, exchanges and performances – is a constant factor in professional practice.

Planites is the perfect example. It was created as part of Modul-Danse, a European programme that gives artists the opportunity to travel to complete their research, and was developed in France, Germany, Ireland and Greece. Along the way it acquired Irish stepdance, flamenco, north African and Arabic influences along with Apergi’s street-dance aesthetic.

“My goal wasn’t to make a folkloric performance, but to try to understand why those people chose to represent themselves in this way,” she says. “The needs of human beings are more or less the same. The only difference in these various dance forms is the way they are communicating, because the essence of what they are saying is the same. So what I’m doing is filtering it and adjusting it for the modern viewer.”

Just as dance forms are fluid, so too are identities. According to Gerry Kearns, professor of human geography at Maynooth University (and another participant at Who Am I?), there is a common perception that identity is fixed and that borders delineate clean differences.

“When we cross a border we bear the mark of our trail,” he says. “We have routes and not just roots. One might be an Irish resident from England, which is not the same as being English or, indeed, Irish.”

Jenny Roche delivered a keynote address at Who Am I? and is performing in Time over Distance over Time at Dublin Dance Festival, a new work by her sister Liz Roche. Four years ago, Jenny moved to Brisbane, where she is a dance lecturer at Queensland University of Technology. With a cast of six living in both Australia and Ireland, Time over Distance over Time investigates issues of fragmentation and connection that are inevitable by-products of migration.

“Skype and Facetime are great ways to keep in touch, but it’s a superficial connection in many ways,” she says. “There is no substitute for physical presence in terms of how we understand each other and communicate.”

She found the physical and emotional distance was more pronounced in her body than in her mind. The physical toll of jet lag, which lingers long after a mental adjustment, is an obvious example, but Roche also found changes in her body and how it moved. Although her Irishness was embodied, she found her physical identity changing in Australia. “To be basic about it, the weather affects our physicality as well as the scale of the country. The hot weather means the physical environment is more open, and I felt my body movements responding to this, as well as having to fit into a larger sense of place.”

Migrants often experience more obvious differences in a new state, with borders marking the spaces in which a body may be out of place. “A foreign body can carry a range of derogatory insinuations,” says Kearns. “Geographers talk about territoriality as the form of control exercised through space. People are controlled by marking spaces and associating restrictions with those spaces and their borders.”

This need for control has manifested in the reappearance of borders and restrictions in some European states. In Planites, Apergi widens the focus from the individual to these issues, investigating the societies into which migrants arrive and how those societies must adapt and change.

“In Greece, we have had to face the problem of sudden and extreme immigration very intensively in recent years. It is posing important social and political questions for us as a nation.” Planites runs tomorrow to Thursday at the Samuel Becket Centre. Time Over Distance Over Time runs Wednesday to Saturday at The Complex.

‘Heathers’: 30 years on – how the dark teen comedy predicted everything
Real news has value SUBSCRIBE