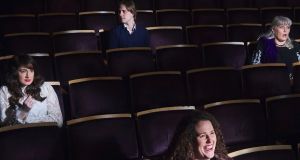 What are we like back there in The Stalls? Picture: Miki Barlok

Cork Opera House
★★★★★
The Cork Midsummer Festival promise of The Stalls is to present what theatre-goers never see: our watching selves. Here we are, politely trying to find the correct seats, one of us breathlessly late, another unwrapping mints like bombs going off in the middle of the third act, another so bored that she wonders if she should get a divorce and find a man who hates opera as much as she does (she finds him and elopes to Mullingar) and here too is the critic who doesn’t really know what’s going on but maybe that’s the point?

This happy slice of a hopefully typical audience sits beneath the interior galaxy we rarely notice in an auditorium turned backwards. Behind us is conductor Tom Doyle, before us this representative group assembled by Deirdre Dwyer’s design. Beyond them is the orchestral accompaniment which provides the punctuation, and sometimes the elaboration, for the soaring interrogative recitatives with which composer Tom Lane has embroidered the sprightly libretto by Lily Akerman without causing any apparent difficulties for five sopranos led by Majella Cullagh and Kelley Petcu or for two tenors and three baritones. And a chorus.

Commissioned by Cork Opera House and the Irish Arts Council this production completes an introspective trilogy on the workings of a theatre.

It is easily described as hilarious, except that it is such a tightly woven composition that the fun can’t disguise its achievement of musical originality within a classical convention yielding brightly confident performance. The ensemble structure for the singers is so well-managed that it is almost unremarkable, with Drew McCarthy’s lighting design supplementing Doyle’s musical control.

Director Conor Hanratty reins in the absurdities even as John Scott’s maddened critic reveals his inner mastersinger of Nuremberg before settling the dilemma of star-rating. No dilemma at all for this reviewer.