Evening Train review: Two young men on the edge of escape, one reckless, the other desperate 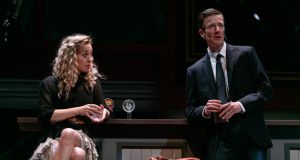 Everyman, Cork
★★★★☆
The initial impression you get from Evening Train is that Jacques Brel is alive and well and living in west Cork. Mick Flannery’s lyrics for this musical, which is based on his concept album from 2005, have the questioning rage that characterised, admittedly to a more inflammatory degree, the work of the Belgian singer.

Flannery’s music, here in his own hands and that of a small band, achieves more subtle harmonies, and the songs of reproach and satire, with rhythm and repetition adding emphasis, are given beautifully graduated renderings by Kate Stanley Brennan, Ger Kelly, Ian Lloyd Anderson and Deirdre Donnelly.

As Ursula Rani Sarma’s script begins its narrative track, other echoes infiltrate: something like Blood Brothers, perhaps, or a hint of Tom Murphy’s A Whistle in the Dark in this tale of two young men on the edge of escape, one reckless, the other desperate, both in love with the same girl and both ensnared by a village life in which the young only want to leave and the old only want to dominate.

It’s the simplicity of the story that resonates: a pub, a poker game, a pregnancy, an ageing mother, evil elders to be overcome and the last train leaving town

There’s no suspicion that this musical, an Everyman and Rosa Productions premiere for Cork Midsummer Festival, grew from these sources, or indeed any other than its own foundation in Flannery’s album. Instead it’s the simplicity of the story that resonates: a pub, a poker game, a pregnancy, an ageing mother, evil elders to be overcome and the last train leaving town.

No single idea is anyone’s private property, but if this illusion could be justified then it would be through Flannery’s songs as the explicit and aggressive articulation of the writing’s creative force. They overcome the occasional but clumsy contradictions of the narrative, and the sweep of their melodic quality is sometimes heart-rending, particularly in the cello and guitar accompaniments.

If there are overtones of something other, including Flannery’s more contemporary writing, then these are an added richness for the affectionate audience.

Coffee & Kareem: If you think swearing is big and clever, this is for you
Real news has value SUBSCRIBE