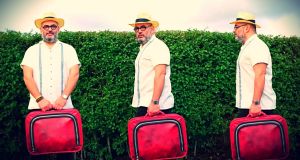 By most people’s accounts, Federico Julián González has lived an extraordinary life. When he was four, his family became political exiles from their native El Salvador. After travelling through a series of unstable South American countries, they settled in Cuba, although his parents, separately, returned to their country of origin, determined to fight for equality in their homeland. For González, however, this was just life, and as he relates his experiences from an empty stage, a red suitcase in his hand, he smiles nonchalantly, even sentimentally, at his own recollections. “History,” he says, “is written by people who weren’t there.” Memory tells a different kind of truth.

González’s 60-minute theatrical testimonial is shaped by six chapters, the titles of which echo his shrugged-shouldered approach to the more traumatic elements of his past. The journey that his story takes is both literal and metaphorical. Returning to Cuba for the first time since 1997, he embarks upon a tour of old haunts with his elderly mother, looking for the people he knew all those years ago, including the titular América. If there is a flaw in the well-structured script it is that Ameríca’s significance to Gonzalez’ story is not made clear enough, at either the beginning or the end.

Director Janet Moran gives González’s effortlessly engaging performance a physical energy. He shimmies across the stage to a Latin soundtrack between chapters, and playfully makes faces at archive footage of his mustachioed teenage self “gone feral”. However, the most striking moment is one of discomfort when, midway through the performance, González steps out of his own story to draw our attention to contemporary issues of migration and dispossession. It is a jolt, but a welcome, vital one; González’s story may be a personal one but it has deep political resonance with our own time too.

From gunner to guerrilla – Tom Barry’s road to rebellion
7