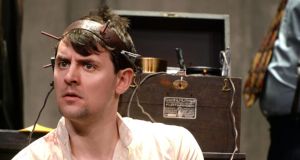 Somebody must have been spreading lies about Katurian K Katurian, for his predicament, in Martin McDonagh’s The Pillowman, could have come directly from the pages of a Kafka novel. (“That’s something-esque,” he tells his police interrogators, amateur literary critics themselves. “What kind of ‘esque’ is it?”) Still, at least Katurian (a well-judged Peter Campion) is succinct with his plot synopsis: “A writer in a totalitarian state is interrogated about the gruesome content of his short stories and their similarities to a number of child murders that are happening in his town.”

Like that arch self-reference, McDonagh’s play creates an artful mesh between reality and fiction and Decadent Theatre Company, entrusted with the play’s belated Irish premiere, respond to it with a clear sighted and brilliantly imaginative production. Opening in a narrow stone cell that rises up like a fairytale tower, Owen MacCárthaigh’s ingenious set and Carl Kennedy’s shivering lullaby soundscape are entirely in tune with the play. What, if anything, is “real” in this sceptic world?

The ghoulish fairytales that Katurian spins (Grimm Brothers stories recut by Quentin Tarantino) are the product of his unhappy childhood – but even that cliche may be a cruel fiction. These stories could have indeed initiated a wave of copycat killings by his damaged brother, Michal (Michael Ford-FitzGerald). But McDonagh, a long-time imaginer of violent horrors, has more intriguingly Orwellian concerns about the “thought police”. I mean – how dare he even come up with this stuff?

The casting is both canny and inspired. As a stand-up comedian, David McSavage has never let good taste get in the way of gags, and it makes him creditable in the role of Tupolski, the less bad cop. Gary Lydon, a more assured stage actor, is good as the worst cop, Ariel. Together they achieve a balance between absurdity and menace that is almost Pinter-something.

This is McDonagh’s best play, yet it too suffers from his customary overwriting, where brilliant flairs of imagination yield routinely to heavy-handed repetitiveness. “Um, could you skip on to the end, please?” asks Michal at one point, quite understandably. He could be talking about his own scene.

If that makes the play sound like a sustained satire on writing, so be it – McDonagh, self-reflexive to the end, may be theatre’s last postmodernist. But Decadent’s production makes it something more enjoyable, probing, diaphanous and unsettling. Anyone with a higher threshold for McDonagh should add another star to the rating above. Perhaps even two.

The Golden Age review: A tough, intelligent story of displacement
7

So what is the meaning of Lowery’s existential fable ‘A Ghost Story’?
8