Culture Shock: ‘The Plough and the Stars’ is back. Must be time for a riot, so 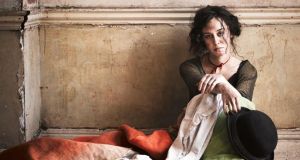 Brechtian: Kate Brennan in Wayne Jordan’s production of The Plough and the Stars. Photograph: Ros Kavanagh

When Seán O’Casey took his seat for the fourth night of his new drama The Plough and the Stars he dryly noted that two plays were actually taking place: “One on the stage and one in the auditorium.”

That night, on February 11th, 1926, both of them turned out to be memorable performances. We tend to think about riots in Irish theatre as spontaneous, reactionary events confined to puritanical and hot-tempered times. “Audience broke up in disorder at the word ‘shift’,” was Lady Gregory’s summary of the Playboy of the Western World eruption. But the truth has always been more complicated.

The disorder that greeted The Plough and the Stars was a while brewing. Offended members of the audience hissed and jeered. People hurled lumps of coal at the stage. Audience members and actors traded punches. Widows of the rebels, who had attended with aggrieved members of Cumann na mBan and Sinn Féin, gave impromptu speeches lacerating the writer and the performers for betraying the men of Easter Week and selling out to the English.

And WB Yeats gave a less-impromptu speech lacerating the rioters for cultural recidivism: “You have disgraced yourselves again. Is this to be the recurring celebration of Irish genius?”

In ways that neither Yeats nor O’Casey could anticipate this was indeed to be a recurring celebration – less of every Irish genius since than of the Plough itself. It’s hard to think of any other play that has so consistently drawn fire in performance, for often very different reasons.

In 1947, during what one contemporary called an indifferent production, two young men stood up and denounced “what they did to O’Casey’s masterpiece tonight”. The protesters were the playwright Roger McHugh and the poet Valentin Iremonger, not the most disruptive of the Abbey’s critics but certainly the most divinely named.

Here the play’s slow slide into something staid became a baton with which to beat the Abbey’s artistic standards and, more pointedly, its infamously conservative managing director Ernest Blythe. (As the Free State’s first minister for finance, who granted the Abbey its subsidy, Blythe had been just as unpopular among the anti-Treaty rioters of 1926.)

This controversy played out in the newspapers, with no lesser figures than Paul Vincent Carroll and George Bernard Shaw demanding Blythe’s resignation, a campaign so wounding that Blythe remained in the position for only another 20 years.

If that thickened the suspicion that The Plough and the Stars had become a cosy slab of heritage drama, so did another significant uproar, in 1991. When Garry Hynes chose the play as the inaugural production of her tenure as artistic director of the Abbey, the play was starkly laid bare. The design was shorn, as were the actors, who performed with shaved heads. A Union Jack swooshed across the stage to begin and end the play, and – in an arch nod to the play’s disruptive past – the insurgent words of Patrick Pearse seemed to come from a querulous member of the audience. Were critics delighted to see poverty, violence and political provocation restored to the play? Take a wild guess.

The Irish Times wrote of a “palpable sense of disappointment”; the Sunday Independent was more excoriating about “Brechtian” techniques. In response to this critical mauling, letters of support for the production flooded this newspaper. The production sold out.

Do we get the Plough we deserve, or does that depend on our particular furrow? In 2010, for instance, critics wrote of the “exciting clarity and freshness” of Wayne Jordan’s staging, reserving particular appreciation for its “Brechtian” techniques. It may seem unusually hasty to have another production currently onstage at the Abbey, but actually the longest the Abbey has ever gone without a Plough is 11 years. When a sheeny 2002 production was revived in time for the Abbey’s centenary it joined a programme that featured Beauty in a Broken Place, Colm Tóibín’s drama about the premiere of The Plough and the Stars. The play certainly offers a way to see the Rising, but it says as much about how the Abbey sees itself, or would like to see itself: engaging and enraging the nation, turning up old ground while aspiring to something higher. Can it, though?

A wry joke in Michael West’s play Man of Valour, from five years ago, anticipated the “commemorative riots” of Easter 2016, as though protest itself might curdle into a dutiful heritage drama. The most meaningful and historic protest the Abbey has since encountered came with Waking the Feminists. On a male-dominated programme Plough was certainly part of the problem but hardly part of the debate.

On the night that the latest Plough opened, in a nation wounded by poverty and inequality, with a government in limbo, vendors were selling copies of the Proclamation in the street, five for €1. Even an ironist like O’Casey might find that excessive. But he’d appreciate that there are, as ever, two plays going on, curious to see how we’re performing ours.