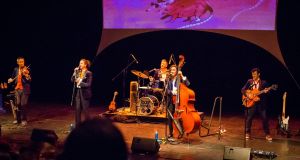 On a Sunday afternoon in October, Galway’s Black Box theatre was rocking with the sound of 600 sets of hands clapping to the rhythmic beats of a new band formed with the sole purpose of turning traditional children’s songs into a soundtrack that the WHOLE family might enjoy.

There was a sinister soulful Rockabye Baby, a doowop medley of Jack-themed nursery rhymes, a bouncy rock-pop version of Incy Wincy Spider, and an Irish-language translation of Twinkle Twinkle, Little Star that would work its magic on even the liveliest of little ones.

The band was the Rockin’ Rhymes Ensemble, pulled together by Branar Téater do Pháistí to bring a high quality, theatrically-flavoured musical experience to family audiences.

The inspiration for the show, explains Branar artistic director Marc Mac Lochlainn, came from the company’s observation of the way music influenced young audiences in their previous shows.

Since the beginning of its performance history, Branar has been widely acclaimed for a high aesthetic blend of visual effect and dramatic narrative: the exquisite puppetry of How to Catch a Star, for example, or the miniature unfolding world of The Night Before Christmas, or the labyrinthine pilgrimage of the ill-fated Sruth na Teanga, which, after almost a decade of meticulous planning, closed after only three shows due to Covid-19.

All of these shows, and the rest of its repertoire, used music, often played live, as a crucial extra tool for storytelling. However, the idea for a purely music-based show was bubbling in the background of the Branar ensemble’s creative mind for some time.

“We would be very aware when we were performing for children,” Mac Lochlainn says on the phone from the company’s Galway studio, “that the kids we were playing to were really engaged with the music. But we couldn’t really let them enjoy it in the way they might want to because we always needed to tell the story.

“So we decided it would be nice to just do a music-based show where the music was the thing, where they could dance or clap or sing. But we also didn’t want it to be a kind of saccharine or dumbed-down kind of music, but to have proper rock music that everyone could enjoy.”

The formula worked. As Mac Lochlainn remembers, “we had asked the venues to leave an area to the front free for children to get up and dance if they wanted to, and it was brilliant. They were like little organised mosh pits. As soon as the music started, they just wanted to dance.”

Building on its success at Baboró festival in 2019, Rockin’ Rhymes was due to tour Ireland this autumn. Instead of disappointing audiences it decided to adapt it for an online experience which would be offered to schools throughout Connacht and Munster, and then nationally in the coming months.

Working with the Lime Tree Theatre in Limerick and Castlebar’s Linenhall Theatre, it decided to try to serve the substantial schools’ audience that the show would attract anyway; to “bring the show into the classroom itself”.

“We had the performers already booked, and we really wanted to keep working if we could. So it was a matter of figuring out what the best way to do that would be.”

The CD will be disseminated to schools as part of a comprehensive teaching pack that includes a series of videos instructing children in the pleasures of music.

The album kept the architecture of the live show, which Mac Lochlainn says was “very deliberate, and really allowed for dips and troughs in terms of the audience’s energy, which can really help you to manage their attention”.

They created a comprehensive resource pack to help teachers use the album to engage with the curriculum and teach children the fundamentals of listening, enjoying and making music. Organised around the basic themes of pulse, timbre, tempo, dynamics, and pitch, the suggested activities are lots of fun, engaging children’s interests across the curriculum.

Key to the delivery of the classroom material is Mac Lochlainn’s daughter Ellen (10), who interviews each member of the ensemble in short engaging videos. Mac Lochlainn says the idea for Ellen’s involvement came from watching the inclusive work that the Sydney Youth Orchestra has made over the years.

Ellen, a veteran Branar contributor, provided voiceover for the animated Pop Up Poetry Project that Branar made for Cruinniu na n-Og earlier this year, and she was delighted to participate.

Her proud father was confident in “her curiosity; she is the ideal audience member, totally engaged”, but he was also confident in her ability to engage confidently with the performers, who she knows very well. However, “she was not coached, and that was deliberate”.

“We wanted to see what sort of questions she would naturally ask as that is what all the kids are probably most interested in. Adults would have certain assumptions: we know what a chord is, or a bow. So Ellen let us see it from a child’s perspective.”

Mac Lochlainn is disappointed that the Branar gang will not get the opportunity “to see how the work is received by [the children]”.

“When you are performing live you come to understand exactly how the audience will respond at different points, what works, what doesn’t work, and you can tweak it in response.

“With this new version we can only know that we have made a great CD and given teachers some of the tools to try to create an environment for enjoying it, but we won’t be in the classroom so it is out of our control. I suppose it reinforces what is special about live performance for us. How much it depends on the communal experience in the room for its success.”

Mac Lochlainn and his collaborators are dying to get back to that “communal experience”, and with that in mind they have devised an alternative online Christmas carol service in the form of Rockin’ Christmas Rhymes, which will be performed live from the Black Box theatre in Galway on December 20th.

“Look, we are not film-makers and we don’t want to be, but we are delighted to get the opportunity to be creative in any way we can and if we have to perform for families in their own homes this year we are privileged to be able to do so.”