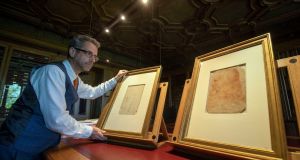 Royal Collection Trust head of prints and drawings Martin Clayton with a drawing which has been recently confirmed as a portrait of Leonardo Da Vinci. Photograph: Steve Parsons/PA Wire

A sketch of a bearded man, owned by the Royal Collection, has been “identified” as Leonardo da Vinci.

The picture, in which the subject “appears a little melancholy and world-weary”, is believed to have been drawn shortly before the famous artist’s death in 1519.

It will be displayed for the first time in what is expected to be a blockbuster exhibition in the Queen’s Gallery at Buckingham Palace.

Martin Clayton, head of prints and drawings at the Royal Collection Trust, identified the face as he prepared drawings, stored in Windsor Castle, for the exhibition.

He said that only one other portrait of da Vinci survives from his lifetime and this drawing is thought to be a more private glimpse of the Renaissance master.

The other contemporary image of the artist is by his pupil, Francesco Melzi, and was produced at around the same time, when da Vinci was about 65 years old.

Mr Clayton said that, looking at both, “it’s hard to avoid the conclusion that that is also an image of Leonardo”.

Both show an “elegant straight nose”, have the same shape beard, “a ringlet falling from the moustache at the corner of the mouth and long wavy hair”.

The face is on a sheet of paper which also contains the artist’s studies of a horse’s leg for an equestrian monument, commissioned by the French king.

Mr Clayton said: “Sheets of paper could be picked up in the studio and used by Leonardo’s assistants and companions just as rough paper for sketching on.

It is thought that “one of Leonardo’s assistants picked up the sheet and made a couple of sketches ... one of an old, bearded man.”

The artist “was rather unusual in having a beard” and “was renowned for his well-kept and luxuriant beard”, Mr Clayton added.

He said: “This very quick, casual sketch” is “the closest that we get of a snapshot of Leonardo during his own lifetime”.

The only other known portrait, by Melzi, depicts da Vinci as “he wanted to be seen, this very august figure, with these untroubled eyes”.

“In public, he was first artist to the King of France, designing architecture, enjoying some of the most successful years of his life.”

But “he knew that he was dying. A paralysis had struck his right arm, he could no longer paint — he could still draw — and he knew that his body was failing...

“It’s incredible how much he did achieve but, by the goals he set himself, his career was something of a failure,” he said of the painter whose best-known work is the Mona Lisa.

An image said to be a “self-portrait” of the Italian master also exists in Turin, Italy, but some experts, including Mr Clayton, have doubted its likeness.

Art historian Kenneth Clark wrote that it was “just conceivable” that the portrait was of da Vinci when he compiled a scholarly catalogue of the drawings in the collection in 1968.

But the Royal Collection Trust said the suggestion went no further after this date, and it has only been during Clayton’s research for this exhibition that the work has been positively identified as a depiction of da Vinci.

The Buckingham Palace exhibition will mark the 500th anniversary of the artist’s death and is the largest display of his work in more than 65 years.

Other highlights will include da Vinci’s studies of hands for the Adoration Of The Magi — revealed under ultraviolet light — on display for the first time.

Visitors will also be able to see studies for The Last Supper and many of his groundbreaking anatomical studies, such as The Foetus In The Womb.

The drawings in the Royal Collection, held in trust by the Queen, have been together as a group since da Vinci’s death and were acquired in Charles II’s reign.

Leonardo da Vinci: A Life In Drawing runs from May 24 to October 13 at the Queen’s Gallery, Buckingham Palace.

A selection of 80 drawings will travel to the Queen’s Gallery in Edinburgh, to form the largest exhibition of da Vinci’s works shown in Scotland from November 22nd.