Review: Portman is the pop star from hell in this unrestrained fun ride 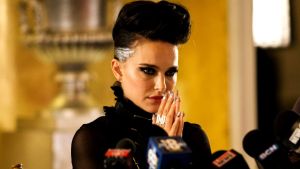 Natalie in Vox Lux: Lady Gaga without the alleged charity

In the eight months since its premiere at the Venice Film Festival, the second film from Brady Corbet – follow-up to his dazzlingly ambitious The Childhood of a Leader – has confirmed that the word “divisive” is not always used euphemistically. Vox Lux has slavering acolytes. Many others have longed for rotten fruit to throw. (And nobody, but nobody, went to see it on its US release.)

The director is certainly at home to the broad gesture and the over-reaching metaphor. If restraint is your sole watchword, you may find yourself fanning your armpits as the credits roll. But this is bravura film-making to a purpose. Nudging Natalie Portman towards a performance worthy of late Crawford, Corbet delivers countless striking set-pieces as the picture probes the politics of spectacle and the dynamics of contemporary fame. It’s that much fun.

Both supporters and detractors of The Childhood of a Leader noted that Corbet wore his influences proudly on his sleeve. In that case, Michael Haneke was in control. The first half of this starkly bifurcated film is, among other things, the best Lars von Tier project we’ve seen in many years.

Willem Dafoe, a veteran of that director’s work, relishes a voice-over whose syntax could be used as an aid for those studying The Book of Lars. “In the beginning, she was kind and full of grace … ” Dafoe begins. We have barely settled before, following a horrible school shooting, Corbet arranges a pile of young bodies in a painterly order that offers further genuflections to the Dane.

In the aftermath, Celeste (Raffey Cassidy) and her sister (Stacy Martin), surviving students, attract media attention by playing their own song at a memorial service.

One can hardly imagine a tastier “narrative” for the circling publicists. Sure enough, she is soon squaring up to mogul Jennifer Ehle and contemplating a life in the limelight. Celeste is a victim, but there is little sense that she is being manipulated against her will. The wave comes up behind and she allows herself to be swept towards stardom.

After about 50 minutes, the film jolts sickeningly forwards to New York in the present day. Now in the brassy form of Natalie Portman, Celeste has returned to play a big gig in her hometown. But there are looming clouds. The media is awash with reports of a mass shooting that seems to reference one of her videos. Her daughter (Cassidy again) is here to express exasperation. Her only marginally appalling manager (Jude Law) fights to restore order.

If the first half works through creative homage, the second part confirms that Corbet really does have his own voice. It is as if the coda in The Childhood of a Leader, in which Robert Pattinson attained fascist supremacy, were allowed to expand into a mini feature.

Enjoying shots of New York that invite skyscrapers to recede gloomily to remote vanishing points, Vox Lux ends up surrounded by a pounding totalitarian theme park. The effect is heightened by a brilliant score from the late Scott Walker – rumbling vocal drones alternating with Wagnerian surges – that looks to be the last we will hear from him.

In the centre of it all is Portman as the demanding, unreasonable Celeste. She is Lady Gaga without the alleged charity. She is Madonna without the apparent discipline. Corbet is right to invite his star to hammer the keyboard with a fury that drowns out Cassidy’s more restrained tinkling. Adolescent trauma and adult acclaim have made something inhuman of the pop star and, chewing her way through all five boroughs in search of Staten Island vowels, Portman relishes the opportunity for recreational domination. Every interaction is a competition that she has to win. To do anything else would be to renege on her demagogic duties.

Opinions differ on the film’s attitude to contemporary electronic pop. There is certainly a worrying contrast made between her current radio-friendly records and the (groan) “authentic” work that made her famous. But Sia’s effective songs for the closing concert suggest that we are allowed to celebrate the power of an increasingly fecund medium. You so rarely punch the air at the choruses in a Von Trier joint.

Vox Lux is something else.