Sense and censorship: An Irishman’s Diary on Edna O’Brien 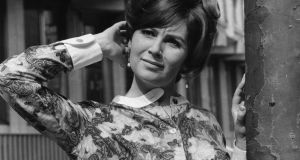 Edna O’Brien in 1966. The Censorship of Publications Board was not the only obstacle to O’Brien’s books being bought and read in Ireland during the 1960s. Photograph: Getty Images

The writer Edna O’Brien was carrying hardback first editions of her internationally acclaimed first five novels when she walked into the Arrivals terminal at Dublin Airport in December 1966.

A mere eight years had passed since she had emigrated from Ireland to London in 1958 – 60 years ago this month – with little more than a byline in the Irish Press newspaper to signal her resolve to be a writer.

Acclaim and awards abroad were, however, almost totally eclipsed at home, where her books were banned and where she was vilified by her family and their Co Clare neighbours, as well as by State and church leaders.

Customs officers at Dublin Airport promptly seized all five books, even though one of them had not yet been officially banned. They allowed her to keep the sleeves of the books and gave her a receipt for what they confiscated.

“I’m not serious, I’m furious”, O’Brien told a Sunday Press photographer who asked why she looked so serious in the Arrivals hall.

The newspaper – the biggest seller in Ireland by a distance at the time – put the photograph and an accompanying report on the front page.

It carried a further report and comment on the incident on page four.

A photograph of O’Brien also dominated the front page of Monday’s Irish Times. The picture was taken the previous night at the Gate Theatre in Dublin, where a debate on censorship attracted an overflow audience. Edna O’Brien had returned to Dublin expressly to attend the debate. In response to a question, she said there was nothing in her banned 1962 novel Girl with Green Eyes which would harm the future lives of her children, then aged 11 and 13. She said that she was not afraid of allowing them to read it.

Passages from her most recent novel Casualties of Peace were read aloud at the Gate Theatre debate by actors Maureen Toal and TP McKenna.

The Irish Times reported that copies of the book “are held up by the Customs authorities pending examination by the Censorship of Publications Board”.

In addition to Casualties of Peace and Girl with Green Eyes (originally published as The Lonely Girl), the other seized books – comprising O’Brien’s entire published output up to that date – were The Country Girls, Girls in Their Married Bliss and August Is a Wicked Month.

The Irish Times carried separate reports on the Gate Theatre meeting and the airport seizures. The latter report quoted her saying: “I think that it is laughable to have books banned at all. It is a great handicap as I would sell many books here. There are plenty of countries that publish my books, including Catholic countries”.

Monday’s Irish Press also carried a photograph of O’Brien on its front page. It showed her at the Gate Theatre with authors James Plunkett and Hugh Leonard, both of whom spoke at the debate. Its report said the censorship of books came under strong attack at the meeting, adding, “Twelve men and Edna O’Brien declared that the system branded authors as pornographers, obscene and indecent”.

A Censorship Reform Society was formed at the meeting. Its aim, the Irish Press reported, was “not to abolish censorship, but to ensure that all measures of censorship in Ireland are conducted on legal, democratic and constitutional grounds, and in accordance with the principles of natural justice”.

The society, it added, “wanted a system whereby a banned author could appeal to the courts, a right which was backed by the Constitution”.

The meeting was also addressed by Micheál Mac Liammóir of the Gate Theatre; the poet and Trinity College Dublin lecturer Brendan Kennelly; and journalists Bruce Arnold and Proinsias Mac Aonghusa.

The Censorship of Publications Board was not, however, the only obstacle to O’Brien’s books being bought and read in Ireland during the 1960s. Reflecting many years later in one of her memoirs on the contrast between her acclaim abroad and her domestic disgrace following the publication in 1960 of her first novel, The Country Girls, O’Brien wrote: “Luckily, in that tenuous state, I was unaware of the righteous correspondence that went on between Archbishop McQuaid and the then-minister for justice, Charlie Haughey, both agreeing that the book was filth and should not be allowed inside any decent home”.