TJ Maher comes out of the wilderness and Zurich portraits impress

After a 25-year gap, the artist is exhibiting – and seeking enlightenment – again 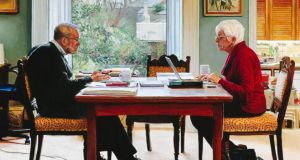 Taylor Galleries, 16 Kildare Street, Dublin, until November 10th; taylorgalleries.ie
In Buddhism, Anicca, or impermanence, is one of three essential traits of being, together with the absence of a fixed self, and suffering. Realisation of the fact of impermanence is a necessary stage on the path to enlightenment. In a note accompanying his exhibition, TJ Maher reflects on a momentary awareness of Anicca: “. . . holding on tightly to things that naturally wanted to change only caused unease in him. Real peace within could only ever be achieved by the letting go of everything without . . . he knew that all that ever truly existed, was now.”

Born in the auspiciously named village of Golden in Co Tipperary, Maher studied at the Crawford School of Art in Cork and then at NCAD, graduating there in 1988.From the beginning his work attracted favourable attention from a wide range of observers. The year following his graduation his first solo show, at the Oliver Dowling Gallery in Dublin, was titled In the Quiet. Over the next five years he held further solo shows, including one consisting purely of drawings. His paintings were physical, textural surfaces. By 1993 they consisted of central, monochromatic blue expanses, held in place by muscular wooden frameworks, as though the enclosed surface might otherwise float away.

Then, though, Maher seemed to float away himself. His work stopped turning up in exhibitions, and it is only in the last few years that he has begun exhibiting again. Prior to that, it gradually emerged that he was engaged in another area of creativity, making a garden, the highly regarded Patthana Garden, in the village of Kiltegan close to the Carlow border in Co Wicklow. The garden is not large in area, but it is densely planted, and it’s fair to describe it as painterly, precisely because it is not a riot of colour. Rather, colour and colour modulations are restrained and carefully calculated. The garden is also managed so as to encourage and support as rich a wildlife as possible.

The work in Anicca carries on from what Maher was doing in 1993. He retains a liking for non-committal titles. The pieces run from Untitled No 1 to Untitled No 24. Again, the actual picture surfaces, mostly monochromatic, are as if held in place by sturdy steel frames – augmented by brackets, nuts and bolts and, on one occasion, a sheet of Perspex bolted over part of the surface. He likes colours with a sharp edge, but judges them very carefully. Red features in his work as a kind of punctuation, used sparely to keep things in order.

As for the surfaces, they are obviously quite worked. Maher paints mostly on board, but often a layer of plaster is laid onto the board, and it can be ragged and scraped. The paint too has an uneven, worn, hard-won  character. Gestural marks also disrupt things. The pieces that are not monochrome panels tend to be simply bisected by horizontal or vertical divisions, with no real chromatic contrasts – a paler against a darker blue, for example.

What of this tenuous, contested, fugitive surface? Maher’s early work allowed the interpretation of the surface as being itself, or a being, assailed by the slings and arrows of living. That still holds true. It also seems fair to see it as the now that is “all that ever truly existed”. The fugitive, scarred, fraught and precious now.

Room 23, National Gallery of Ireland, Merrion Square, Dublin, until January 13th, 2019; nationalgallery.ie
Once, when asked a question about the possibility of art becoming exhausted, the painter Sam Francis responded: “There are as many images as there are eyes to see them.” The same holds true for portraits. They are perennially interesting because we are curious about people. The idea of an image that conveys a personality, a sensibility and essence is always irresistible, even when so much of image-making is devoted to disguise, diversion and enhancement. Despite or perhaps because of the revolution in imaging technology and the ubiquity of the smartphone selfie, portrait prize schemes and exhibitions have become increasingly popular.

They are also more open, receptive to the wider possibilities opened up by the dethroning of the formulaic formal portrait of an authority figure, usually male, embellished with the emblems of achievement and position. This year’s Zurich exhibition reflects a great deal of this developing openness and diversity. And the inescapable significance of photography in contemporary culture. That the winner, Mandy O’Neill’s photograph of Leaving Cert student Diana, is a superb study of female strength and confidence seems necessary and timely.

The two commendations, Blaise Smith’s polite double-portrait of his parents, and Kim Haughton’s close-up photograph of the late JP Donleavy, are solid enough pieces of work. But the adjudicators were in the fortunate position of being spoiled for choice. Fionn McCann’s excellent photograph of Brian O’Doherty, Miseon Lee’s hypnotic self-portrait, Jonathan Mayhew’s ingenious memory stick portrait, and Cara Dunne’s ambitious double portrait of Molly and Ruby, and perhaps one or two other works, all easily merited commendation.

Out of the wasteland: the first World War and modernism
7