Rethinking the meaning of revival of the Irish language 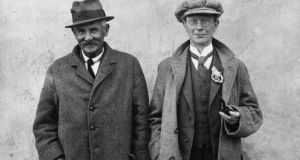 Founders of the Gaelic League, Connradh na Gaedhilge, Eoin MacNeill (1867 - 1945) and Doctor Douglas Hyde (1860 - 1949). MacNeill supported the Anglo-Irish Treaty and was a delegate for his government to the Irish Boundary Commission. Photograph: Walshe/Topical Press Agency/Getty Images

The role of the Irish language in the ongoing Stormont impasse has led to much talk of the language being politicised, weaponised and otherwise instrumentalised. Yet it would be wrong to think of this as being a recent development or to assume that languages should remain in some way neutral.

Minority languages always have a sense in which they are something much more than a means of communication. Its threatened existential status typically leads to a minority language being consciously regarded as an instrument of something greater - even a metaphysical concern.

In 1850s New York, Protestant evangelical societies employed Irish-speaking “colporteurs” in an attempt to gain converts among the thousands of new Irish immigrants. One of these colporteurs, Patrick J Leo, remarked on how preaching in Irish was “an inducement to them to come, to hear their own language.” The use of Irish as an inducement, its instrumentalisation in the cause of proselytising may not have surprised Irish immigrants in New York, after all it had been a feature of life in Ireland for decades before this as part of a movement dubbed the Second Reformation.

Thus Irish language primers and religious books were produced by a variety of Protestant bible societies. This in itself was nothing new. The history of printed books in Irish is inextricably bound to the battle for souls. The very first printed book in Irish was a Reformationist text, Foirm na nUrrnuidheadh (1567), or The Book of Common Order, and, in the seventeenth century, the first sustained printing project was undertaken by Catholic clerical scholars as part of the Counter-Reformation.

What all of this points to is the fact that the Irish language has been instrumentalised for centuries in many ways beyond the domain of cultural nationalism. So, it should not be surprising to find a staunch unionist and Presbyterian, James MacKnight, editor of the Belfast News-letter, proclaiming in 1832 that “Belfast rescued the Irish Harp from oblivion and to perfect its fame a revival of the Irish language and literature is only wanted”.

Today’s Belfast News-letter would scarcely concur. Yet MacKnight was no less a unionist for having advocated the utility of Irish for reasons that had nothing to do with securing independence for Ireland. He was an Irish speaker who advocated practical measures for the revival of Irish at a time when decline was beginning to set in, yet his motivation was not only practical but philosophical, as one of his articles demonstrates: “There is something unaccountably fascinating in the language of past times, and though it may be difficult to resolve the emotion into its first principles or to pursue it through its ultimate divergencies of mental association, there is scarcely an individual who does not feel it.”

What MacKnight was driving at was that, beyond the specific concerns of patriotism or confessional rivalries, lay a much more fundamental reason for reviving the Irish language, one which has to do with the ways in which we relate to the past and our need to reintegrate what appears to have been lost to us.

This is a concern that might be traced back at least as far as Plato and the concept of anamnesis, whereby all learning is recollection or a return to previous knowledge. The idea of returning to occluded sources of knowledge is also central to the Renaissance and to the Reformation.

In the latter part of the nineteenth century these broader questions were probed by Nietzsche and Freud in various ways. Nietzsche’s first book, The Birth of Tragedy (1872), argued the case for a revival, specifically an attempted retrieval of elements of Western culture that had been lost or repressed, particularly the meaning and use of tragedy.

His presentation of “eternal recurrence” as a continual return to what has already been, and his insistence on a form of radical becoming in response, reflect, in many ways, the essential challenge of revivalism - to make the revisitation of the past an act of creative renewal. Freud was similarly concerned with looking back so that we might look forward, observing as he did persistent patterns of repetition and regression in human mental processes and behaviour.

So the notion of a return to what has already been is a very old one. Equally, the desire to revive elements of our past is evident in a wide variety of spheres including religion, art, design, architecture, politics, literature, music, fashion and pop culture. Yet in Ireland, the word revival tends to be reduced to a specific period of heightened cultural production between the 1890s and 1920s.

Rather than there being one period of Irish revival, it is more accurate to speak of revivalism as a recurring critical cultural practice. From its beginnings in the seventh century, the Irish literary tradition experienced successive periods of revival and renewal, often involving a creative dialogue between the living and the dead such as occurs in the late twelfth-century Agallamh na Seanórach (The Colloquy of the Ancients), where Caoilte and Oisín return to relate the deeds of Finn and his Fianna to St Patrick.

When the Irish literary tradition came under active existential threat from the seventeenth century onwards, the strategies of revival and renewal became part of an acquired self-awareness, an awareness that more dominant languages and literatures do not acquire, simply because they can assume that there is no threat to their existence. Paradoxically, in the case of Irish and other minority languages and literatures, existential uncertainty has engendered an awareness of their own agency.

Taken in the current context of globalisation and pervasive cultural homogeneity, this minority language awareness is a powerful instrument. To go against what appears to be the inevitable course of things, be it language decline, climate change or societal apathy is an act of Promethean defiance.

The alternative view, summarised in TG4’s “súil eile” motto, is the default outlook of Irish-language literature of the twentieth and twenty-first centuries. Where else did Brian Ó Nualláin (Flann O’Brien/Myles na gCopaleen) acquire this alternative perspective, if not from being raised in an Irish-speaking family far from the Gaeltacht?

Ó Nualláin was an admirer of Seosamh Mac Grianna’s autobiographical Mo Bhealach Féin (1940), in which a series of quixotic adventures is played out as part of a manifesto of radical idealism summarised in his assertion “b’fhearr liom siúl sa ré dorcha ná a bheith dall” (I would rather walk in darkness than be blind). Mac Grianna’s refusal to be bought was later characterised in his novel Dá mBíodh Ruball ar an Éan (1940) by the figure of a martyr-artist who is likened to Prometheus.

It is likely that the reference to Prometheus came via the translation of Aeschylus’ play, Prometheus fé Chuibhreach (1933) by George Derwent Thomson/Seoirse Mac Thomáis, an English professor of Greek who was the main instigator and later translator of Muiris Ó Súilleabháin’s world-classic tale of youth, Fiche Blian ag Fás (1933). Thomson’s translation was in turn translated as Vingt Ans de Jeunesse (1936) by the French surrealist Raymond Queneau who later wrote a burlesque novel of the 1916 Rising, On est Toujours Trop Bon avec les Femmes (1947). Who thinks of 1930s Ireland producing such a sequence of events?

Yet none of this would have happened without the Gaelic League revival, nor would the INNTI poets of 1970s Cork, and so the contemporary Irish poetry of Nuala Ní Dhomhnaill, Biddy Jenkinson or Doireann Ní Ghríofa would most likely never have been written. Yet the Gaelic League was itself a specific manifestation of what is a perennial, universal concern with recovering the loss of what we value. In essence, it and other revivals are about the bold imagining of alternative histories and cultures - it is this that gives force to revivalism and to its enterprise of creative renewal.

Rather than focussing on the perceived failure of state-led language revival we need to embrace the value of a tradition of revivalism, one that has brought us an awareness of language and culture as constructs that are negotiable rather than fixed. What emerges is the potential to challenge that which appears pre-ordained, inescapable and insurmountable. That is a very powerful instrument indeed.

Fionntán de Brún is Professor of Modern Irish at Maynooth University. This article is based on his book, Revivalism and Modern Irish Literature: the anxiety of transmission and the dynamics of renewal (Cork University Press).