Piers Morgan is the lickspittle of the reality TV ecosystem

Piers has his wants and needs, and is happiest when he is celebrity-adjacent 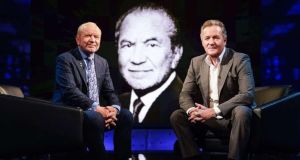 I don’t believe in cockneys. I’m a cockney truther. I believe that they’re an entirely made up thing like unicorns or hobbits or regretful Brexit voters. I think the lie began with Dick van Dyke and was weaponised under Thatcher in order to bolster the British whelk industry.

I believe that Eastenders is a fantasy drama, like Game of Thrones, that Sid James never existed and that all Only Fools and Horses episodes were made just last year on a sound stage in Dallas. Also: Danny Dyer is secretly French. Just print out a picture of him, draw a beret on his head and put “Ooh la la!” in a speech bubble by his head. See! Totally French.

This is a long way of saying I’m not predisposed to enjoying the Piers Morgan’s Life Stories episode about rags-to-riches Pearly King Alan Sugar (Virgin Media One, Thursday). Lord Sugar is best known for playing a businessman on The Apprentice which, if you’ve been paying attention to US politics, you’ll know to be a local franchise of contemporary fascism. Lord Sugar also sounds like a more suitable name for a post-apocalyptic warlord or breakfast cereal mascot than a knees up Mother-Brown Jack-the-lad, but there you go.

Each year the saccharine peer sits flanked by flunkies, assessing a new crop of business goons

The UK Apprentice has a straightforward premise. Each year the saccharine peer sits flanked by flunkies, assessing a new crop of business goons. These young supplicants are all crisply-besuited, straight-backed and earnest and say things like, “I am a business badger and I hunt the greatest prey of all, profit!” before falling headfirst into a wheelie bin or failing to sell fat kippers to hungry gulls.

Lord Sugar seems happiest when grumpily absorbing the energies of these flailing corporate cutoffs and consequently, after many years, he has far more apprenti than anyone could hope for. These damned souls wander his grounds like peacocks, ever eager to show you a powerpoint presentation before they’re culled by the gamekeepers. But Sugar will never stop his quest for the perfect apprentice and you should definitely apply next season. Send in your CV.

Piers Morgan has his own wants and needs. As demonstrated by his whole career - from disgraced tabloid editor to shameless television contrarian - he is happiest when he’s adjacent to a celebrity and being slightly but not devastatingly rude to them. When he is so positioned his whole body pulsates. Then, fully engorged, his skin becomes smoother and shinier, his eyes become glassier and his slight smile grows even more ambiguously pursed. After his recent interactions with Donald Trump, he was left so puffed up he resembled one of those big worms from the film Dune and had to be rolled out of the studio.

And so it is that in each episode of Life Stories, Morgan has a conversation with a slightly more famous person than himself in front of a huge image of the famous person’s face while surrounded by an adoring roomful of acolytes. This is probably no different from what happens in Lord Sugar’s own sitting room, so he doesn’t seem too overawed by it.

Morgan and Sugar are now so embedded in the reality show narrative machine that they can no longer tell truth from truthiness and they start the episode by paying lip-service to an apparent feud they’ve been having across Twitter, which follows them from one television studio to another. It’s tiresome. I simply don’t believe that Morgan and Sugar are anything other than the same organism and that beneath the studio floor they’re not connected by a network of tentacles and wires.

Anyway, Sugar pretends to be unwilling to cooperate with Morgan’s questioning. Morgan baits him with accusations about his behaviour when it comes to things that don’t really matter (like whether he won a Bafta or his production crew did). At one point, Sugar plucks an eye dropper from his pocket and adds pretend tears to his face (he really does this), in order, he says, to give Morgan the emotional sustenance he craves.

He can’t fool me. I know he’s really just ensuring he doesn’t shrivel into a desiccated husk in the heat of the studio lights. For Sugar is as dry and prickly as Morgan is fluid and smooth. Indeed, if there’s no picture accompanying this article, an image of Morgan and Sugar together can be accurately represented by placing a raisin next to a throat lozenge.

Morgan has become a sort of interpretive lickspittle for the bigger boys in the reality television ecosystem, which is now, as you know, the political ecosystem. This episode features a few of those big boys. Rupert Murdoch is conjured up from the underworld (Australia) in order to praise his former prodigy. Donald Trump, the Apprentice’s pouting ur-boss, manifests in an outtake from another Morgan interview. Looking like a radioactive business-baby, he pours scorn on Sugar’s business achievements at Morgan’s gleeful instigation.

We get a tour of Sugar’s career. We also learn that Sugar can’t recall if his parents ever said they loved him and that he was playing tennis when his son was born (these sound like answers to test questions in Blade Runner). The gist of it all is that Sugar is an East End boy done good who is now a Labour peer and could write a cheque for £150 million on a whim. He is, by his own account, a self-made man of the people (like Mr Potato Head or Worzel Gummidge) and if he can do it, then why can’t the rest of you, you workshy millennial scum?

Their goal is to each amass a Fagin-like collection of urchins in order to compete in melodic combat. I’m generally worried by the late capitalistic instinct to turn all joyful things into a competition, but this programme also features children singing, and that’s a beautiful thing. By the time a very talented but sick little girl named Chloe tells us about learning how to sing again with a feeding tube in her nose, I’m genuinely a weeping mess. It’s almost enough to make me believe in magic or unicorns or maybe even cockneys.